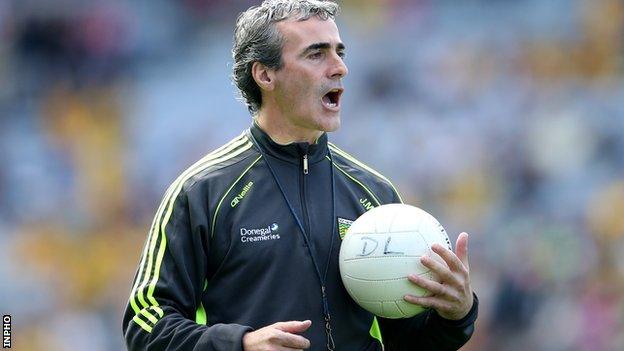 Donegal manager Jim McGuinness says he 'trusts' his players to carry out his instructions against Dublin on Sunday.

McGuinness must devise a strategy to combat the all-attacking style of the defending champions in their All-Ireland semi-final in Croke Park.

In what is expected to be the most tactical game of the year, McGuinness says the game is "one hundred per cent about football players".

"We trust (players) to out and do a job," said McGuinness.

"Whenever we have passed the information on that we think is really important for the game, it's up to the players to make the decisions then.

"You give that information, they'll clarify it with you, and try to execute it to the best of their ability."

McGuinness, who led Donegal to a third Ulster title in four years last month, is unconcerned about being rated as rank 8/1 outsiders on Sunday, despite his team having been All-Ireland champions two years ago.

"We were underdogs in every single game in 2012, so that doesn't make a difference.

"Our approach is the same. It doesn't matter if (bookmakers) sit at a computer and say 'that's the number'.

"No one knows what goes on in our dressing room. You just have to get things right and put faith in the players.

"You could take it personally and you could use it. But this is about football, that's all. There are a lot of things we need to get right and that's what we're focusing on."