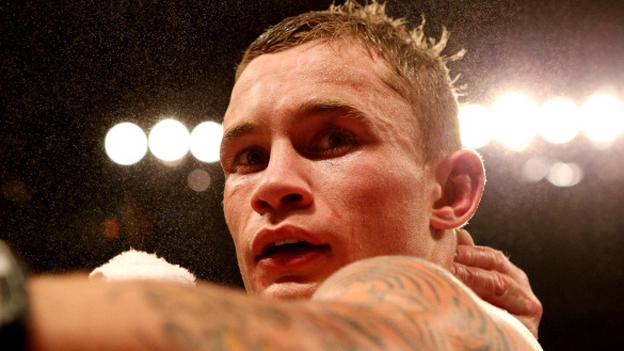 What if you went into work tomorrow knowing that the project you're working on that day would define your whole career and maybe your life?

It will determine your legacy - whether you're remembered as a winner or a nearly man.

What if you knew you only had one shot at achieving your life's ambition and it was all down to the events of this one day.

How would you cope?

This is the scenario facing Belfast boxer Carl Frampton on Saturday 6 September as he prepares for his shot at becoming a world champion, when he faces Spain's Kiko Martinez for the IBF world super-bantamweight title.

Frampton, who is aiming to emulate his manager and mentor, Barry McGuigan, by becoming world champion, explains what this fight means to him.

"To win the world title will be a dream come true. I started this journey at seven years old, and I have had my ups and downs. To become a world champion in my 20th year, in a stadium built for me - it is what dreams are made of," he says.

Frampton will aim to achieve his dream in front of a hugely expectant home crowd, at Belfast's iconic Titanic venue, in an arena constructed just for this fight, such was public demand.

So how can elite-level athletes prepare to try to ensure they produce their optimum performance at the defining moment of their careers?

Bill Cole, a world-renowned peak performance coach based in California, says it involves the athlete making a conscious decision.

"The odd paradox of this situation is to not fall victim to the 'do or die' mindset," he says.

"The athlete can choose to use this excitement for extra energy, or become overwhelmed with the gravity of the situation. It really is a mental decision that has to be made.

"Caring too much is the number one reason why athletes fail to produce their optimum performance on the biggest stage."

Dame Kelly Holmes has experience of competing under the most extreme pressure. Ten years ago at the Athens Olympics, she achieved her dream of becoming a double Olympic champion.

She believes a fear of failure can be both a positive and a negative.

"It can be debilitating for some athletes who start worrying about everything that could potentially go wrong, but the fear of failure drove me on as I hated the thought that I could come off the track feeling I hadn't done absolutely everything I could have to win," she says.

"I always tell athletes I'm mentoring there is nothing worse than leaving the track with any regrets."

Cole considers that having an emotional and mental edge is crucial.

"I call this killer instinct. An athlete does not want to be relaxed and easy-going, they want to be keyed up and ready to pounce," he says.

"They want to be the calm centre inside the raging hurricane swirling about them. Experienced and confident athletes call this 'will to win'. Less experienced athletes call it 'fear of failure'. It's a choice the athlete makes in advance, giving them both energy and peace of mind. That is the potent mix that drives champions to the heights."

The pressure of competing in world title fights or Olympic finals can make or break competitors.

Some crumble with nerves, but four-time Olympic champion Michael Johnson, speaking at London 2012, explained how he embraced the pressure of competing in finals during his career.

"I enjoyed it actually because, all other things being equal, it's the person who handles that pressure best at that particular time who is going to have the best performance," he says.

"You're already under tremendous pressure knowing the significance of the moment and knowing that this is what you have been training for all those years and so I saw it as a dream come true to be there."

No room for doubt

Cole always asks an athlete, particularly before an important event: "Would you rather be arrogant or be lacking in self-belief?"

"If they answer 'I don't want to be considered arrogant', that is a trouble sign. I want my athletes to believe that they are as good, if not better, than anyone they will ever meet," he says.

"Self-doubt is an absolute deal-killer and it can plague any athlete. A good athlete always straddles that fine line between lack of confidence and the overblown arrogant cockiness we see in some athletes.

Give me the over-confident athlete, any day. That person I can throttle back and talk sense into. But if there is a lack of fire in the belly, that is extraordinarily difficult to muster out of thin air; impossible, often, on demand before a big event. By then it's too late."

Life in the spotlight

Holmes has previously revealed that in the run-up to the 2004 Olympics she self-harmed and at one point considered suicide. Reflecting on this period now, she says that it was the pressure of competing and living life in the spotlight.

"It came about because of the pressure and all the expectation. Competing at the top level is a roller-coaster of emotion. But I never gave up believing in my dream that I would become Olympic champion," she says.

For the 2004 Olympics games themselves, Holmes recalls being totally meticulous in her preparation and determined to stick to her game plan no matter what.

"Key for me was making sure the team around me were the absolute best people and that my preparation was totally spot on. I'd had so many injuries over the previous seven years, but was still winning medals so I knew the talent was there. If I could just be 100% right, then I knew I could perform well. I realised there would be no second chance.

I took the pressure off by not focusing on it being an Olympic final. I knew how to perform as I had done it thousands of times before, so I focused on doing everything exactly as I always did and didn't alter anything. I stuck to my game plan in the final, even when it meant initially being at the back of the field."

Her advice to athletes preparing for their career defining moment is simple: "Remember all the success you have had in the past which brought you here.

"You've done this thousands of times before, have confidence in yourself and don't worry about things you can't control, just concentrate on what you can control."

Cole agrees it is a huge mistake for an athlete to change his or her normal preparation just because they face a major event.

"I suggest the athlete stick to their well-known schedule and training regimen, as far as is possible, within a month leading up to the event," he says.

"Changes after that require a learning curve and can be unsettling. Better to go with the tried and true with conviction, than a half-hearted attempt with techniques you don't really trust yet.

Holmes believes the importance of being mentally right cannot be overestimated, given that so little separates elite-level athletes.

"The head will make you fail or win. You can be perhaps not 100% right physically because you're carrying a niggling injury and still win, but if you're not 100% right mentally you'll fail," she says.

"For me, for an athlete to win a major competition it's 20% physical, with the training and what we do every day, and 80% is head - the mental aspect."

So what advice does Cole have for Frampton as he embarks upon his career-defining fight?

"Carl, this is your opportunity. You know there are no guarantees, nor would you want a guarantee if one were offered. You want an adventure and a memorable experience. Isn't that what life, and boxing, is all about?"

As for the fighter himself, he is single-minded and insists he will remain calm in spite of the crescendo of noise all around him.

"Once I'm in there I'm not worried about the crowd. It's just me and him. I had my first fight when I was seven, so I'm more than ready to take the title. I'm not going to let anyone take my dream from me," he says.

As Frampton's dream world title shot gets under way, could it be one concussive shot from the hard-punching Belfast fighter that closes the show, allowing him to realise a 20-year dream?