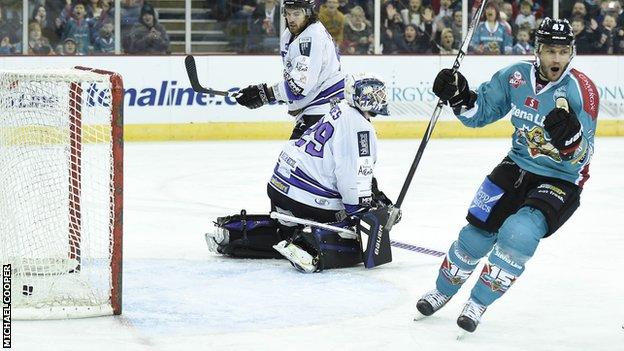 The hosts made a blistering start and were 3-0 ahead after six minutes with Craig Peacock, Adam Keefe and Darryl Lloyd on target for the champions.

Braehead quickly pulled one back through Leigh Salters before Lloyd completed his double to restore Belfast's three-goal advantage.

Mike Kompon and Kevin Westgarth added to Belfast's tally in the third period.

The Giants started strongly and Peacock opened the scoring with just 2:35 gone with a speculative shot from distance which found the net through a crowd of players.

It was 2-0 two minutes later as captain Keefe broke away to score on a Braehead powerplay.

The third was soon to follow as Lloyd scored a similar goal on the break to leave the Scottish visitors reeling.

The Clan appeared to have regained their composure and got a foothold in the game when Salters struck within a minute.

However, the rampant Lloyd netted again before eight minutes had elapsed.

For a clash between two of the top four sides in the league, the game was surprisingly open and played at a high pace and intensity throughout.

The Giants could thank their netminder Carsen Chubak for keeping their three-goal lead intact going into the first break.

That trend continued in the second period as Chubak was the busiest man on the ice, repelling all the Clan could fire at him to maintain the healthy looking scoreline for Belfast heading into the final 20 minutes.

After weathering the Braehead storm, the Giants wrapped up the points with two more goals in the third period.

Kompon scored a cheeky solo effort, squeezing the puck in at the post, while Westgarth's contribution was fittingly emphatic as he smashed home on a powerplay.

The teams meet again in Scotland on Sunday in another Elite League match.