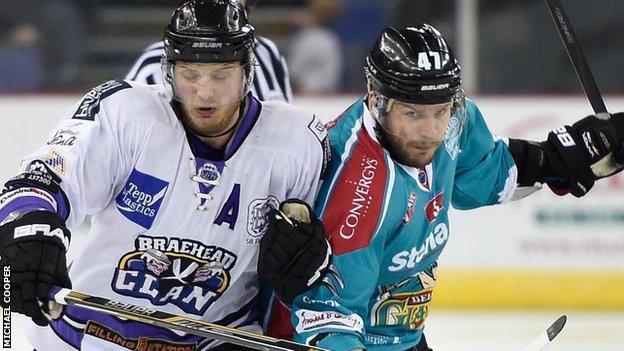 Belfast Giants were defeated 5-2 by Braehead Clan on Sunday night to halt their winning run of five games.

The Elite League champions hammered the Clan 6-1 on Saturday but goals from Lee Esders, Tristan Harper and Matt Keith put the Scots in charge in Braehead.

Mike Kompon pulled one back and he netted again after a goal from Stefan Meyer, who completed his double with 37 seconds remaining.

Meanwhile, Belfast have signed Curtis Huppe for the rest of the season.

Huppe, now in his second spell with the Giants, has been training with the squad and acted as injury cover in recent games.

He first joined the Giants in 2004, spending three seasons in Belfast and helped the team to the Elite League title in 2005/06.

In those three seasons, Huppe played 138 games and posted 79 goals and 82 assists, averaging over one point per game for the Giants.

"He's keen and hungry and with the injuries we've had this year - it's important for us to have an extra body," said Giants coach Steve Thornton.

"He has scored a lot of goals in this league in the past. He's dangerous and he has a great shot and makes good plays.

"He's a great guy who has come in with a great attitude. I know that he's itching to get out there and this is a good opportunity for him to prove himself."

Esders opened the scoring for Braehead on 30:09 and it was 3-0 within two minutes, although Kompon hit back quickly for the Giants.

Meyer restored the three-goal advantage and he had the final say just 21 seconds after Kompon's second goal of the game.

Belfast are back at the Odyssey on Tuesday night with an Elite League encounter against Dundee Stars.