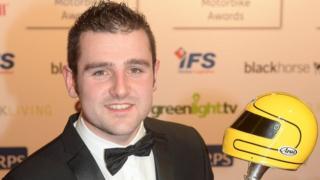 Michael Dunlop lifts the main honour at the Irish Motorcyclist of the Year awards for the first time.

The Ballymoney road racer enjoyed an outstanding 2014 during which he won four events at the Isle of Man TT races for a second year running.

The fact that he also won twice at the North-West 200 helped him beat short circuit star Jonathan Rea to the Irish Motorcyclist of the Year award.

Dunlop became the first rider to win four races at the Isle of Man TT in successive years in 2014 and was a double winner at the North West 200.

Dunlop was also named International Road Racer of the Year, with Rea chosen as Short Circuit Rider of the Year.