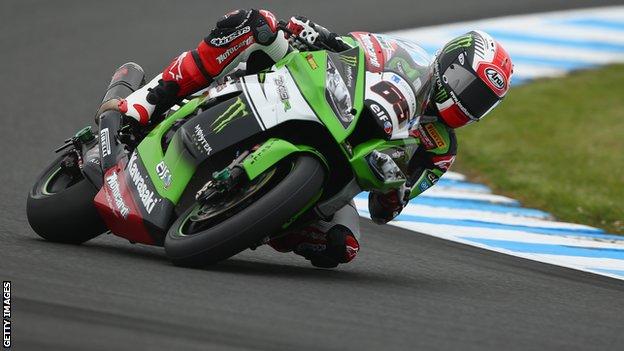 Northern Ireland rider Jonathan Rea begins his bid to win a World Superbike title with his new KRT Kawasaki team at round one at Phillip Island on Sunday.

The 27-year-old ended his association with Pata Honda at the end of last season, having finished third in the 2014 series, including four race wins.

"We've done all the testing we can do - I'm happy it's race weekend," said Rea.

"Definitely, this is the best position I have ever been in at the start of a season. I'm looking forward to it."

The County Antrim man added: "We still have some things to work on - it is just a bit of an unknown really so I'm working with my guys on the bike and trying to focus on going as fast as I can for all 22 laps of both races."

Several changes have been made to the technical regulations for the 2015 championship, which will be held over 13 rounds, beginning with the traditional curtain-raiser over the 4.445km Phillip Island circuit.

Rea, who has achieved 15 victories in his 140 World Superbike starts, will be partnered in the Kawasaki outfit by 2013 champion and last year's runner-up, Tom Sykes.

"Kawasaki have a full factory set-up in the series and the effort that is going in is second to none - that's one of the main reasons why I joined them.

"I'm joining one of the strongest teams over the past three seasons and the bike is really easy to ride so that fills me full of motivation.

"It's still a bit unclear just how strong all our competitors are as the regulations have changed but we'll see how we stack up at the first race, although that doesn't always give a clear indication of where we'll end up."