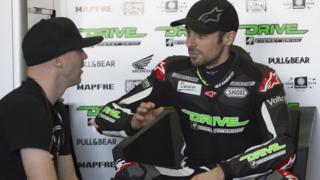 Eugene Laverty admits he will have to adjust to the prospect of not competing for race wins as he prepares for his first season with the Aspar Honda team in MotoGP.

Laverty has been a regular contender for podium positions in World Superbikes for a number of years but says victories are "not really a realistic target in my first season in MotoGP".

"It's going to be a big change for me mentally because I've won at least one race for each of the past six seasons.

"I'll have to change my approach a little bit but I'm not going to be sitting back - I'll still be fighting for 10th or eighth place like it's a race win," said Laverty.