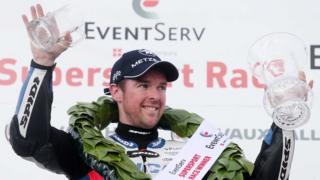 Fermanagh man Lee Johnston completed an all-Northern Irish podium and the story was the same in the Supertwins race as Farquhar won from Jeremy McWilliams and Jamie Hamilton.

With two Superstock races now scheduled for Saturday, Seeley should have five chances to get close to or perhaps even better Robert Dunlop's all-time record of 15 wins.