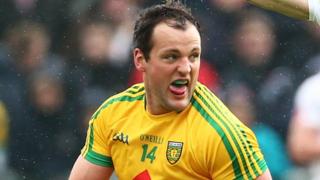 Donegal skipper Michael Murphy is content after his team's Ulster SFC win over Tyrone but says they will have to improve for the next game against Armagh.

"It was by no means a polished performance but to win it and get through to the first round proper is all that counts," Murphy told BBC Sport.

Murphy added that goalkeeper Paul Durcan's performance was crucial to the victory as he made a couple of important saves and also delivered accurate kick-outs.