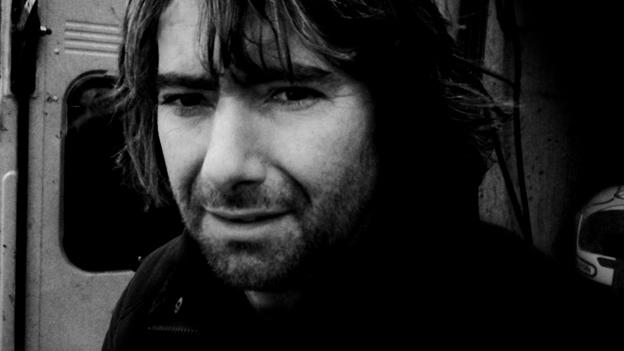 More than 50,000 people gathered around the tiny Garryduff Presbyterian Church in Ballymoney, County Antrim, to bid farewell to a true sporting legend.

Road racing is the toughest of sports and requires hard men. But many of these hard men were unashamedly in tears, heads bowed, saying their final goodbyes to the unlikeliest of sporting superstars.

As the funeral of Joey Dunlop got under way on 7 July 2000, people were still trying to come to terms with the fact that the seemingly indestructible road racer had been killed in a minor race in Estonia five days earlier at the age of 48. 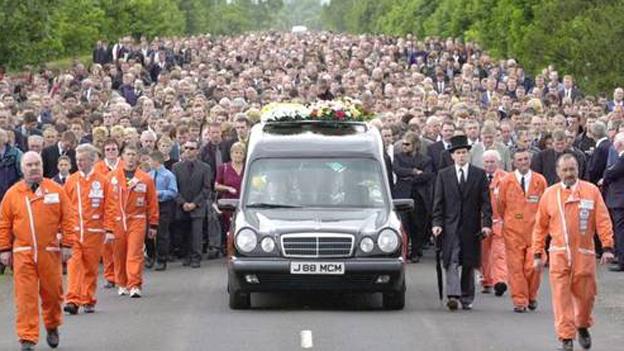 Fifteen years on from that emotionally-charged day, some of those close to Joey having been reflecting on the legacy of this shy man who hated the limelight, but whose popularity was such that in a recent poll conducted by the Belfast Telegraph, he was voted Northern Ireland's greatest ever sports star, ahead of the legendary George Best.

"Joey was quite simply the greatest at what he did and he always did it with the absolute minimum of fuss."

For Liam Beckett, it is this combination of Joey's iconic stature alongside his shy, unassuming persona, which ensures his popularity endures.

"Joey was always uncomfortable when being showered with adulation. He was much more content when in the company of his family and close friends. In many ways it was these 'down to earth' qualities which endeared him to his legions of fans."

Throughout the Troubles in Northern Ireland Joey remained apolitical, attracting loyal support from Catholics and Protestants alike. Famously superstitious, he always wore a red t-shirt and a yellow crash helmet.

He would regularly load up his van with food and clothing and drive across Europe to deliver parcels to the orphans of Romania, Bosnia and Albania. Typically, this was done without any fanfare.

Siobhan Carter, who volunteered at one of the orphanages Joey visited in Romania, has been reflecting on the major impact he made there.

"Joey's visit raised morale greatly with the staff and children. For me, seeing someone from near my home town in Northern Ireland, arriving with supplies which he had personally struggled to deliver to his destination, without translators, and sleeping alone in minus conditions in his van, touched me greatly", she said.

"I do believe Joey received a calling to help others following his visit and that led him to make many future trips to help in orphanages."

Joey was awarded the OBE for his humanitarian work in 1996 and he described it as the proudest moment of his life.

Posthumously his charity work continues through the Joey Dunlop Foundation which receives donations from around the world.

The risk of serious injury or death is a constant companion of the road racer, such is the perilous nature of the sport. But given that Joey had survived for so long, it was still a huge shock when he was killed while leading a 125cc race in wet conditions in Tallinn, Estonia on 2 July 2000.

He had spent his last night on earth sleeping across the front seats of his van, eschewing the hotel suite that had been laid on for him.

Liam Beckett remembers the events of that day well.

"Joey's youngest son Richard had stayed overnight at our house, as he and my son William are best friends. We had just finished Sunday dinner when I saw Joey's daughter Donna come speeding in my driveway. She was in floods of tears and in seconds I could hear a commotion with my wife Gillian shouting 'no Donna, no'. That is how I received the dreadful news."

Motorcyclists came from as far afield as Australia, Japan and South Africa to attend Joey's funeral, riding in noisy formation. So many stood in the tiny country lanes around Dunlop's modest bungalow that it took the undertakers an hour to carry him through the crowds to complete the mile-long trip.

"A stunned silence and a sense of real disbelief had descended over the entire country, and beyond," said Liam Beckett.

"The people's hero was gone and the outpouring of grief was a spectacle which I feel won't be repeated in Northern Ireland."

Although Joey's brother Robert, another motorbike legend, was killed during practice at the 2008 North West 200, Robert's sons Michael and William are ensuring the Dunlop dynasty remains at the forefront of road racing.

William Dunlop, speaking last year shortly after breaking his leg at the Isle of Man TT, was typically matter-of-fact about the risks involved.

"I got away with it last time and as soon as I was well again I jumped straight back on a bike," he said.

It's a great life being on the edge all the time. I don't care - I guess that's what it is. Maybe if I had a kid that might change me. But I can't see it."

The story of the Dunlops has been told in a recent documentary, the highly acclaimed Road, in which Joey is the star.

Joey Dunlop is the man with the common touch who became a sporting icon and who in death has become a mythical figure.

Liam Beckett believes his legacy will live on: "Joey is still revered throughout the world as the quiet country lad who went on to become the greatest motorcycle pure road racer of all time. Quite simply there will never be another Joey."

For Siobhan McCarter, his charity work should not be forgotten.

"For me Joey's legacy is the definition of a humanitarian - a person who sought to promote human welfare."

"He appeared to live a life where all people he met, regardless of class or creed, were special to him as a human being."

As for the man himself, what would he want his legacy to be? Joey once said how he would like be remembered: