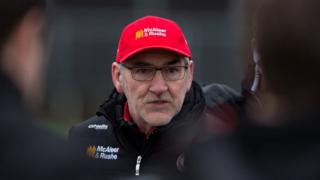 Mickey Harte is delighted as his Tyrone team impressively see off Derry in the Ulster Championship.

Two goals by Ronan O'Neill and one from Peter Harte had the Red Hands 11 points up at half-time and they ran out 3-14 to 0-12 winners.

With such a big interval advantage, Harte admitted it was hard for his players to maintain their tempo in the second half.