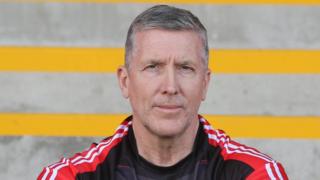 Derry manager Damian Barton says he takes full responsibility for his side not appearing to be emotionally and physically right in Sunday's Ulster SFC hammering by Tyrone.

"In terms of the whole package I have to accept responsibility. Emotionally were we right, physically were we right?" said the Derry boss after his team's 3-14 to 0-12 defeat at Celtic Park.

"We are better than an 11-point deficit. We started the year in a blaze of glory when you look at the McKenna and early league performances.

"We were pacy and creative, but that has left us. People have to manage it on the pitch. I thought our leaders on the pitch did not stand up."

"Otherwise the season is gone."