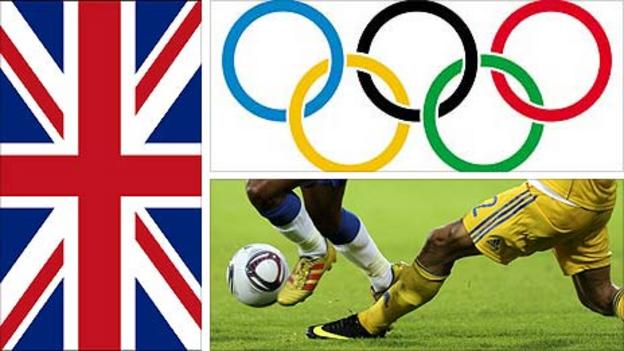 Scotland, Wales and Northern Ireland have reacted angrily to claims that their players could take part in a united Great Britain football team.

The British Olympic Association said a "historic agreement" has been reached with the English Football Association over fielding teams at the 2012 Games.

But a collective statement from the other nations denied this was the case.

"No discussions took place with any of us, far less [has any] historic agreement been reached," it said.

Gordon FarquharBBC sports news correspondent
The Scottish, Welsh and Northern Irish FAs remain opposed to a GB team, fearing it will damage their autonomy at Fifa, despite repeated re-assurances to the contrary from the world governing body

"The Football Associations of Scotland, Wales and Northern Ireland reiterate our collective opposition to Team GB participation at the 2012 Olympic Games in London, contrary to the media release issued by the BOA.

"We have been consistently clear in explaining the reason for our stance, principally to protect the identity of each national association. With that in mind, we cannot support nor formally endorse the approach that has been proposed by the Football Association."

Welsh FA president Phil Pritchard had earlier claimed: "The [English] FA have no authority to speak on our behalf, they do not represent us."

While on Monday Regan claimed there was "absolutely no appetite" for his players to take part in a joint football team.

The BOA's statement said that there would be a men's team at 2012 and, for the first time, a women's GB side at the Olympics. The FA will have responsibility for nominating the managers, players and support personnel to the BOA for final selection.

I'd like to thank our counterparts at the Welsh, Irish and Scottish FAs for their understanding on a difficult issue

It added that all home nations were behind the move to field a GB team made up of players from England, Scotland, Northern Ireland and Wales - and had been given assurances that participating at the Games would not damage their individual status.

"The FA has consulted with its partner associations in Scotland, Wales and Northern Ireland in developing the player-selection criteria and timeline," read the statement.

"All four associations have received a written assurance from the secretary general of Fifa, the international federation for football, that participation in the 2012 Olympic football tournament will in no way compromise their autonomy and independence for other Fifa-sanctioned tournaments, nor will it have any impact on their positions of leadership within the Fifa governance structure."

The BOA statement went on to detail how the men's squad would be made up, explaining that it would comprise of 18 players - 15 under-23s and three 'open age' players, while there would be no age restrictions upon the women's team.

It added that the process of selecting players would begin later this year, while "an announcement of the managers for both Team GB sides will be made in due course".

A long list of potential players will be drawn up by the managers of the respective teams.

"Players on the long list will be asked to confirm their interest and availability to compete for Team GB, if selected, following discussions with their respective professional clubs and home associations," added the BOA statement.

"The selection criteria will be entirely non-discriminatory, as players from England, Scotland, Wales, Northern Ireland and other territories which fall under the BOA's remit as an National Olympic Committee."

The last time Britain competed in an Olympic football event was in 1960, when the men's side failed to win a medal in Rome after beating Taiwan 3-2, drawing 1-1 with Italy and losing 4-3 to Brazil.

"We're delighted there will be football teams representing Team GB at the London 2012 Olympics," said Horne.

"We are pleased the team will be selected from players across the home nations and I'd like to thank our counterparts at the Welsh, Irish and Scottish FAs for their understanding on a difficult issue."

The second round of ticket sales for the competition will open on Friday, with 1.7m remaining for the two football tournaments.

The first event of the Olympics will be a women's football match at the Millennium Stadium in Cardiff on 25 July, with speculation suggesting it could involve the GB team.