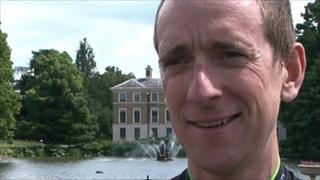 British cyclist Bradley Wiggins says the way tickets for London 2012 have been allocated is a "shambles" in comparison to his experience of previous Olympic Games.

Nearly two-thirds of applicants - some 1.2 million out of 1.9 million - missed out on tickets in the initial ballot.

A second batch of 2.3 million tickets goes on sale at 0600 BST on 24 June on a first-come, first-served basis.