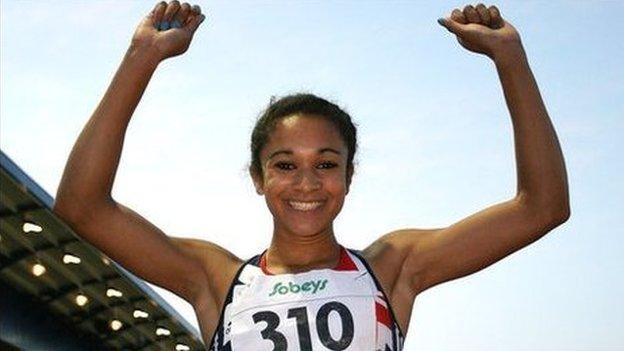 The fastest girl on earth has three world junior and youth sprint titles to her name.

The teenager was described by Britain's head coach, Charles van Commenee, as "the sort of athlete every country is waiting for" after her senior international debut at the 2011 European Indoor Championships in Paris. Williams produced two personal bests in the 60m and missed out on a medal by one hundredth of a second.

She went on to clinch the European junior sprint double in July, setting a UK junior record of 11.18 seconds in the 100m final.

Even before I ran, I wanted to be in the Olympics. It was one of those little kid's fantasies but hopefully it will happen now

Williams won her first 151 outdoor races, spanning five years, before she was finally beaten in the 200m final at the World Junior Championships in Canada in 2010.

She admits to "crying about 20m from the finish" when she realised she wasn't going to catch American rival Stormy Kendrick, three years her senior, but still finished strongly to snatch silver.

Williams had won the 100m title a few days earlier and the previous year won the sprint double at the World Youth Championships, aged 15.

Her parents were both county-level sprinters but it was Williams' PE teacher that urged her to join the local athletics club in Hertfordshire.

Her coach, Mike McFarlane, and dad, Richard, have taken a deliberately low-key approach to Williams' prodigious rise, even turning down lottery funding to keep her out of the spotlight and also frustrating head coach van Commenee by preferring to sidestep this year's senior World Championships.