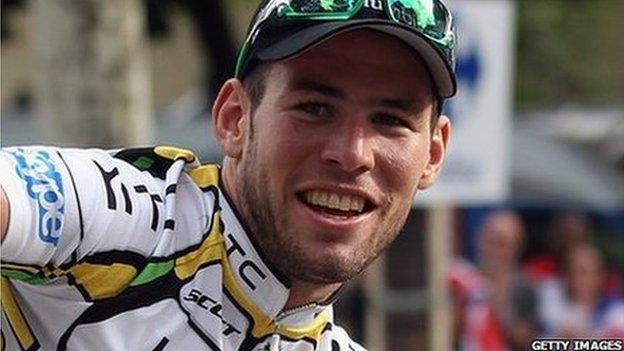 A two-time world track champion, Cavendish is the most successful British professional road racer of all time. The pinnacle of his career to date is his gold medal at the Road World Championships in 2011 - the first triumph by a Briton since Tom Simpson in 1965.

Earlier in the year, Cavendish became Britain's first winner of the green jersey for the race's best sprinter. He is one of only two British riders to have won stages on all three of the Grand Tour events. In total, he has 22 stage wins in the Tour de France, winning two in the 2012 race.

Back on the track, he claimed the Isle of Man's first Commonwealth gold for 20 years in the scratch race in 2006.

He was voted the BBC Sports Personality of the Year for 2011.

He competed in the madison at the 2008 Olympics but was the only member of the British track team not to win a medal, which led to a falling-out with his race partner Bradley Wiggins.

He has also come in for criticism for his riding style: he was fined in 2010 for his part in a massive crash, and was withdrawn from another race the same year for making a V-sign aimed at his critics after winning a stage.

Until he was 14, he did ballroom dancing and competed at the British Junior Championships. According to his former dance teacher, he liked Latin American, jive and rumba.

In 2008, he was awarded the freedom of his home town, Douglas, on the Isle of Man, although the ceremony did not take place until 2011. He joins the likes of Sir Winston Churchill, Norman Wisdom and the Bee Gees in receiving the honour. His girlfriend is former Page 3 model Peta Todd - they had their first child, Delilah Grace, in April.