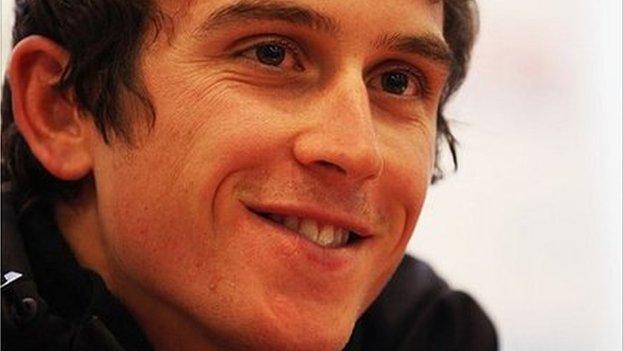 He won Olympic gold in the team pursuit in Beijing and also has three World Championship titles in the same discipline.

The Welshman is a former scratch race junior world champion and won the national road race title in 2010.

In May 2011, he celebrated his first professional road win in the Tour of Bavaria. The Team Sky rider wore the white jersey for the top young rider for several stages during the 2010 and 2011 Tour de France.

In 2006, he had to have his spleen removed after crashing in a race in Australia. He received two blood transfusions and was in intensive care for four days and now promotes campaigns for giving blood.

In 2009, he misjudged a corner while descending a mountain pass, hit the safety barrier and fell 20 feet to the road below, fracturing his pelvis and breaking his wrist.

The Cardiff-born cyclist was the youngest competitor in his debut Tour de France in 2007 - he finished 140th. He was appointed an MBE in the 2009 New Year's Honours List.