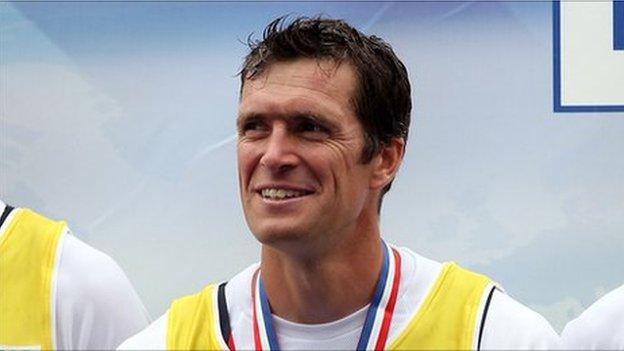 Searle is striving to challenge for a second Olympic gold in London, 20 years after he won the coxed pairs title in tandem with his brother Jonny and tearful cox Garry Herbert.

Searle, who will be 40 by the time of the London Olympics, says he celebrates 2 August every year to mark the anniversary of his 1992 triumph; the rowing finals in 2012 start on 1 August. His seven world championship medals include a gold in the coxed pairs in 1993 and two silvers since his comeback - in the eight in 2010 and 2011.

Searle won the coxed pairs title at the 1993 World Championships and retired from top-level rowing after the 2000 Olympics, where he was edged out of a coxless pairs medal in a photo finish.

He announced his comeback in 2009, having been attracted by the lure of a home Olympics, and returned to the Great Britain squad for the 2010 World Cup series as part of the men's eight.

During his absence from rowing, he spent a year working as a grinder for the British team in the 2002 America's Cup Challenger Series and competed in a couple of London marathons and the BBC Superstars series, reaching the final. He has also worked as a rowing commentator for TV.