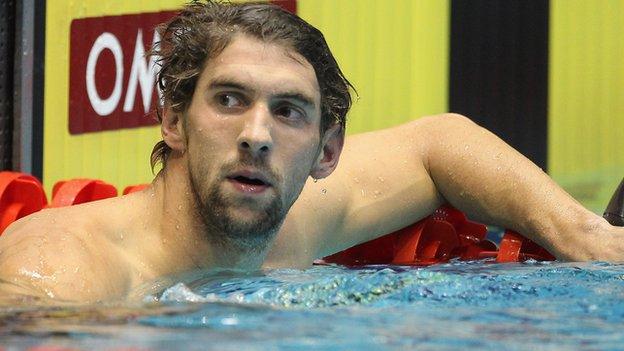 Phelps made history at the last Olympics by winning eight gold medals, the most by one athlete at a single Games. He set seven world records and eight American and Olympic records in Beijing.

His overall tally of 16 Olympic medals - including an unmatched 14 gold - is bettered only by Soviet gymnast Larysa Latynina, who won 18 between 1956 and 1964.

Phelps is the most successful swimmer in World Championship history, with 26 gold medals. It is a measure of his achievements that his tally of four golds at the latest World Championships in Shanghai was considered a slight disappointment.

He was banned for three months by USA Swimming in 2009 and dropped by a major sponsor after photographs were published of him smoking a marijuana pipe.

Phelps publicly apologised for his "regrettable" behaviour and for having "demonstrated bad judgement".

Baltimore-born Phelps took up swimming aged seven in order to provide him with an outlet for his energy (he was diagnosed with attention-deficit hyperactivity disorder as a child).

Phelps has an arm span three inches greater than his 6ft 4in height. A man's height and arm span are generally the same, so Phelps' increased span enables him to generate more power than his rivals.