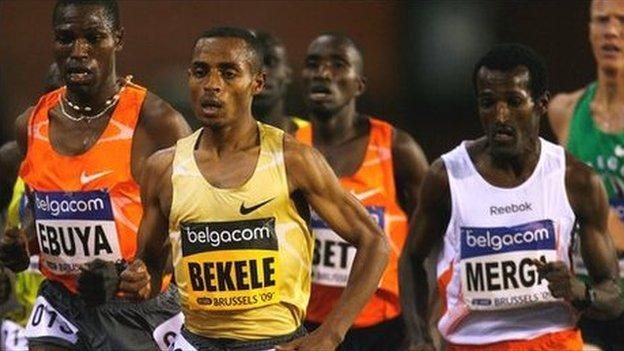 The phenomenal Ethiopian is the greatest ever long-distance runner, with three Olympic gold medals and 16 world titles: five on the track and 11 in cross-country.

Bekele won the Olympic distance double in 2008, setting championship records in both the 5000m and 10,000m. He repeated his double-winning feat at the World Championships the following year - an unprecedented achievement.

Bekele missed the 2010 track season with a ruptured calf and then a knee injury.

He made his comeback at the World Championships the following year after a 19-month absence, but his lack of conditioning took its toll as he failed to finish the 10,000m final. It was his first defeat over the distance.

He suffered tragedy in January 2005 when his teenage fiancée Alem Techale collapsed and died of heart failure while on a training run with him.