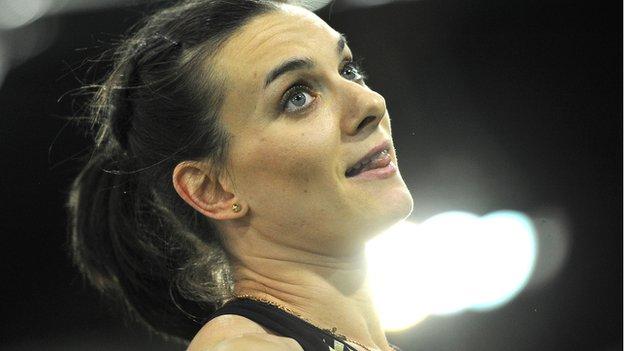 Golden girl Isinbayeva is seeking a third successive Olympic title in 2012. The Russian has set an incredible 28 world records and her goal is to surpass mentor Sergey Bubka's mark of 35. Her world record of 5.06m is the equivalent of clearing a London double decker bus with more than two feet to spare.

Ominously, the former world and European champion says her appetite is back after taking a sabbatical in 2010.

A combination of physical and mental exhaustion prompted the former world and European champion to take an 11-month break after finishing out of the medals at the 2010 World Indoor Championships.

She had failed to defend her world outdoor title the previous summer as the strain of constant competition since 1998 took its toll. Her fall from grace continued with a sixth-place finish at the 2011 World Championships.

She was originally a gymnast but deemed to be too tall by the age of 15. Her school coach told her to try the pole vault, prompting Isinbayeva to confess she had never heard of the event.

She won her first major title at the World Youth Games in 1999 and has since gone on to become a three-time IAAF Female Athlete of the Year and twice named the Laureus World Sportswoman of the Year.