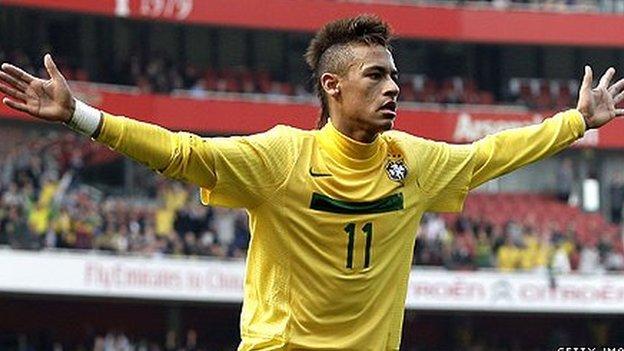 Yet another player to be burdened with the tag of the 'new Pele', his early performances for Brazil have made the football world sit up and take notice.

Neymar made a goalscoring international debut against the USA in August 2010 and in his third cap he scored twice in a man-of-the-match performance against Scotland.

In June 2011 he helped Santos win the Copa Libertadores - the most prestigious club competition in South America - for the first time since the Pele-inspired victory of 1963. Linked with a host of top European clubs, Neymar has a buy-out clause of £40m. He won the 2011 Fifa Puskas Award for scoring the best goal of the year - a fine finish after a bewildering piece of skill to beat a Flamengo defender.

It's very important for us to win the gold medal. It's a chance for the players to make history

He has been involved in a host of disciplinary issues and his actions got his manager at Santos, Dorival Junior, sacked.

Neymar had been relieved of penalty duties and responded with a host of abuse at Dorival, who then told the player he would be dropped. However, Dorival was sacked before Neymar had even received his punishment.

Such was the clamour for Neymar to be named in Brazil's 2010 World Cup squad that a petition of 14,000 names was collected and delivered to then-coach Dunga at his house by a TV station.

Dunga failed to see the funny side and called the police.