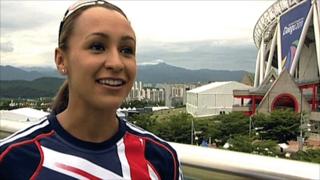 British heptathlete Jessica Ennis tells BBC Sport's David Bond she is inspired by the "golden generation" of former British athletes, such as Denise Lewis and Steve Cram, and hopes to continue their legacy at the World Athletics Championships.

The reigning world champion says she is relishing the prospect of defending her title in Daegu, South Korea, and despite admitting she was nervous earlier in the week, Ennis insists she feels in "great shape" ahead of the event.