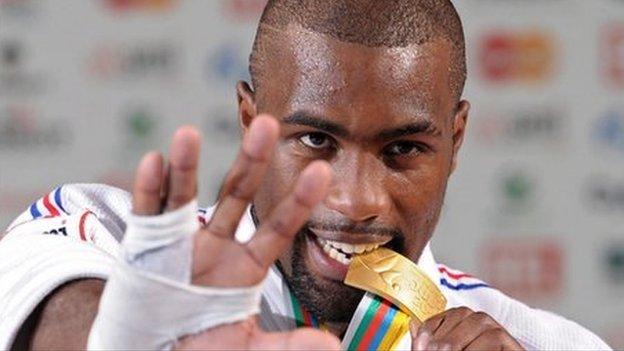 The 6ft 8in (2.04m) heavyweight has already won a record five individual world titles, his first coming at the age of just 18.

His vast superiority was demonstrated at the 2011 World Championships in Paris where - in front of his home crowd - he won all but one of his matches by ippon on his way to gold. All that's missing is an Olympic title; in Beijing he had to settle for bronze after losing to Abdullo Tangriev of Uzbekistan.

"He's brilliant. Technically, physically and mentally he's the best," Yamashita said after the 2011 World Championships. "Teddy Riner will be Olympic champion in London, I'm sure of that. After London he will be a superstar."

Born on the small Caribbean island of Guadeloupe during a family holiday, Riner was raised in Paris.

He remains close to the country of his birth and went there for a three-week break after the 2008 Games. "I needed to get rid of the tension," he said.