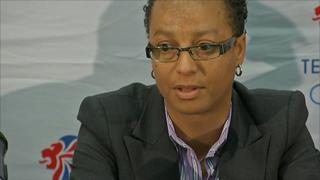 Hope Powell says she is "privileged and honoured" to be named the first coach of Great Britain's women's football team ahead of the London 2012 Olympics.

Powell, who has led England's women for 13 years, hopes the Games will lead to a rise in popularity in the women's game in the home nations.

Powell became the first female and full-time national coach of the England women's team in June 1998, following an international career that earned her 66 caps and 35 goals for England.