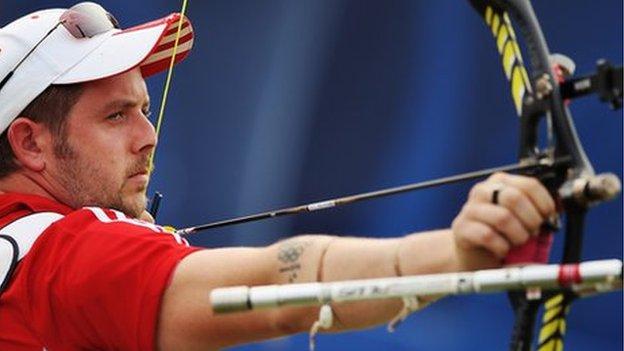 Godfrey reached the last four at the 2004 Olympics, where he was Britain's only male archer. He narrowly lost to the eventual champion, Marco Galiazzo, in his semi-final before losing the bronze-medal play-off by a single point to Tim Cuddihy of Australia.

He reached his first World Cup final this June and has previously won a team silver medal at the 2007 World Championships, and bronze in the mixed team event with Amy Oliver in 2011.

An aerospace engineer for Rolls-Royce, Godfrey's day job includes repairing engines for the Apache helicopters being used by British troops in Afghanistan.

He often practises archery in his house - shooting arrows through the hallway at a target in his kitchen.

Bristolian Godfrey, who was introduced to archery by his father as a nine-year-old, has an Olympic tattoo on his right forearm.

It cost him £60 ahead of the 2004 Games and is dominated by the Team GB lion logo and five Olympic rings.