It was a spur-of-the moment opportunity that changed Sophie Hitchon's life.

One day four years ago, a coach suggested she try the hammer. She was only asked because her local athletics club didn't have anyone to win points in that discipline.

Hitchon, now 20, had never even picked up the metal ball that has since become the focus of her life, but it quickly became clear she had unexpectedly found her calling.

Inside a year, she had broken the British under-17 record, and before her teens were up she had set a total of 14 junior and under-23 records. Then, in 2011, Hitchon broke the British senior record twice.

To complete her remarkable rise, this summer she expects to compete at London 2012 as one of Britain's most promising young athletes.

Her progress is all the more surprising when you discover that, between the ages of two and 14, she was a ballerina.

"We did shows every two years at the Mechanics Theatre in Burnley," Hitchon tells BBC Sport. "I always remember my first. I was a duckling in The Ugly Duckling and I had a lovely white tutu with sparkles on it."

Ballet was dropped in favour of athletics and netball, yet Hitchon's dancing background is not just a good tale from her past - it played a crucial role in developing a key part of her skill set: agility to aid the turns before the hammer is released.

The other vital abilities for hammer throwers are speed and strength. Hitchon can run the 100m in 12.1 seconds and lift 80kg - three kilogrammes more than her bodyweight.

She had been an ambitious county-level performer in the 100m, 200m, shot-put and high jump, but in the hammer she found the perfect outlet for her abilities. 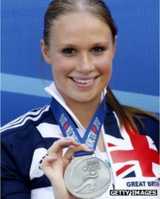 Hitchon - an athletic 5ft 9in - feels women throwers, be it shot, javelin or hammer, are wrongly stereotyped as being of a larger build. "It has changed now from the old style of big, Eastern Bloc women," she says. "You don't have to be a massive girl to throw far. It is more about technique and speed."

That's not to say it hasn't taken hard work.

"At first I couldn't even let it go," said Hitchon. "You start off just swinging it while standing and move on to learning footwork and turns. Your feet take care of themselves after a while and my progression was very quick.

"I think my coaches were all shocked at how I had picked it up, but I always wanted to be paid to do sport. I am ecstatic that it's worked out."

In 2007 - the year she took up the hammer - Hitchon set a British youth record with a throw of 54.56m. She finished seventh at the 2008 World Junior Championships, also setting four new British junior records that year.

She then won bronze at the 2009 European Junior Championships with a throw of 63.18m. It was the first time a Briton had collected a medal at that level in the hammer. "I was elated," she says.

At this stage, her potential was recognised by UK Sport and she was given Lottery funding, enabling her to become a full-time athlete. In February 2010 she left her parents' home in Burnley to be based at Loughborough's famed sports-orientated university and coached by Derek Everley, the centre director.

Following this step-up in training, Hitchon won the 2010 World Junior Championships with another British junior record of 66.01m before, last May, setting a British senior record of 69.43m.

"I knew it was far, as you know when you have thrown well," she says. "It just feels easy. Exactly how far, I didn't realise at the time but when it came up on the board it was amazing."

Two months later, she broke her own record with a throw of 69.59m at the European Under-23 Championships to win bronze.

While her best is 10m from the world record, Hitchon believes hammer throwers peak in their late 20s. Current world record holder Betty Heidler of Germany set the landmark of 79.42m last year at the age of 27, but she did not hit the distances Hitchon has already achieved until the age of 22.

So, to London 2012. To qualify, Hitchon needs to hit the B standard of 69 metres twice this year, an achievement she comfortably accomplished in 2011. But while she is confident, Hitchon is taking nothing for granted, perhaps burned by the biggest disappointment of her career so far.

Hitchon surprised herself by qualifying for last year's World Championships in Daegu. For someone who describes herself as driven and always wanting to win, it is through gritted teeth that she talks about her 26th-place finish.

"I had been nowhere near the standard, but then we had to think quickly about going to Daegu," she says. "I didn't throw well and it wasn't a good time for me.

"Throwing with the world record holder in the same competition was, like, wow. I was a bit overwhelmed, which didn't help.

"I was walking around the athletes' village at the world champs and Usain Bolt walked past and I was like 'Oh my God', but you realise you are there to compete at the same championships and it is nice to know."

You sense that the hurt - and the experience of being at a major tournament - might just spur her on. Next year she has set herself the target of reaching the Olympic final, but ultimately she wants to be the first Briton to win a major medal in the hammer.

Hitchon's British record would have put her 11th in the Beijing 2008 final, six metres behind the gold medallist, Belarusian Aksana Miankova.

"Looking to [the Olympics] I'm not looking to go and win, but when I sit back and think it is only four years that I've been involved in the hammer it is amazing really," she says.

"If someone said to me in 2007 that in four years you'll be at a World Championships and British record holder and have travelled the world, I would have just gone, 'Yeah right, you're having a laugh.'"