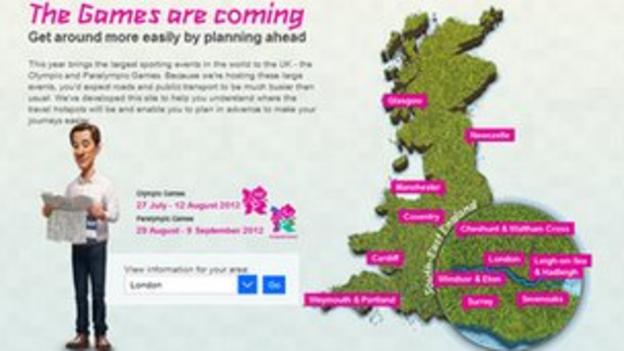 He was speaking at the launch of Get Ahead of the Games, a campaign to raise awareness of Olympic transport issues.

"To all members of the International Olympic Committee, I urge them to do the right thing - get on the Jubilee Line because they'll love it," he said.

The Olympic Games start on 27 July.

Mr Johnson wants IOC chiefs and sponsors to forego the dedicated Games Lanes available to them during the Olympics and instead take advantage of London's public transport system, which has seen £6.5bn of improvements.

He said the campaign was "key to the preparation and planning that will help everyone in London to profit from what promises to be a remarkable summer".

Transport Secretary Justine Greening said London 2012 and TfL had been working with businesses to ensure they had contingency plans in place to cater for the expected congestion in London during the Games.

Now, she said, a multi-media advertising campaign would communicate directly with the travelling public, offering tips, travel information and advice on how to reduce, reroute, retime or remode their journeys to avoid the hotspots.

"The Government will lead the way, with staff working and travelling more flexibly during the Games," she said. Her own department was changing 50% of its transport plans during the Olympics, she added.

The three-phase Get Ahead of the Games campaign aims to:

Transport Commissioner Peter Hendy said the TfL's twin objectives - to host a great Games and keep London and the UK moving - would be achieved as London, which already sees 25m daily journeys, was well equipped to deal with the 3m more expected on the busiest day of the Games.

He said the website's day-by-day planner showed which Tube stations would be busiest. And while hotspots like Canary Wharf and London Bridge might see half-hour delays for passengers boarding trains during rush hour, he added that people would not be adversely affected if they planned their routes.

"You don't need to sit under the kitchen table with a tin hat on and eat tins of baked beans for six weeks," he said.

He added that he was not concerned by the latest breakdown of pay talks with the RMT - which has rejected a £500 bonus for Tube workers on shift during the Olympics - saying it was a "tactic".

The union, which represents thousands of Tube staff, said the money was not an adequate reward for being on duty during the event.

Locog chairman Sebastian Coe defended 30 miles of controversial Games Lanes that will be introduced for Olympic vehicles during London 2012, describing the Olympic Route Network (ORN) as "a Godsend for athletes".

The introduction of the ORN and Games Lanes for officials, international media, VIPs and emergency vehicles has sparked anger with businesses and residents concerned about increased congestion and traffic restrictions, particularly in London.

Mr Johnson was adamant cyclists would not face any impediments as a result of increased congestion, saying the Games would be "a bonanza for cyclists".