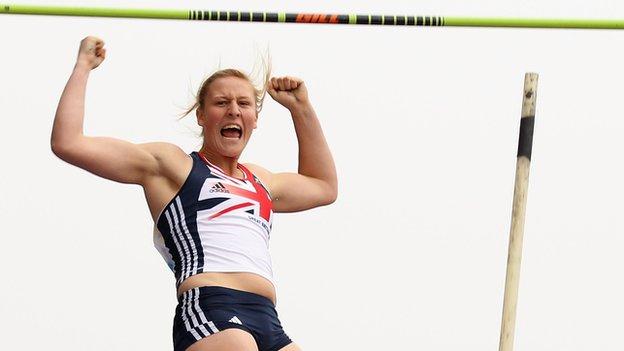 Bleasdale soared to fourth on the all-time world list with a stunning jump indoors of 4.87m in Lyon at the start of the year. It added 16cm to the British record she set outdoors in 2011.

Bleasdale earned the first global championship medal by a British female pole vaulter when she took bronze at the World Junior Championships in 2010. The following year she won gold at the European Under-23 Championships.

There will be lots of home support (at the Olympics) and, being only 20 years old, I will have a lot to deal with anyway without the talk of medals in the press etc

She broke down in tears after failing to register a height at the 2011 World Championships.

Bleasdale broke her take-off foot in 2009, and her mum gave her a necklace with the inscription: "Believe in yourself and magic will happen."

The Lancashire native only took up pole vaulting in late 2008 after seven years of gymnastics training and moderate success in the hurdles and heptathlon.

She is part-funded by millionaire philanthropist Barrie Wells, whose grandfather Ernest Latimer Stones was the pole vault world record holder in the late 1880s.

Bleasdale's mother Debbie will be at the Olympic stadium as a field-of-play volunteer.