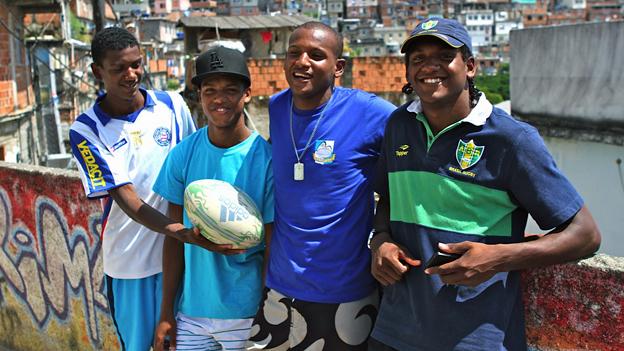 When the Olympic Games come to Rio de Janeiro in 2016 two sports will make a comeback after a long absence.

Golf will be appearing for the first time since 1904.

The other newcomer is rugby sevens - the full 15-a-side game last appeared at the Paris Games of 1924. The BBC's World Olympic Dreams series producer Kevin Bishop was in Rio to find out if the sport is catching on there.

As darkness begins to fall on Ipanema Beach, rubbish trucks and sand-raking machines trundle along, clearing away the remnants of another day's fun in the sun. Most Cariocas, as Rio's residents are known, have headed home or moved on to the bars and restaurants in Ipanema's side-streets.

But between two lifeguard stations there is still life. A dozen or so young men are being put through their paces in a beach rugby practice session. They shout for the ball in English and Portuguese. Sand flies and laughter rings out.

Rio Rugby started in the 1940s when English workers from several companies formed the Royal Society of Saint George to maintain English traditions. It has long been a chance for expatriates from rugby-playing nations to meet, play and socialise with each other. A few beers are opened and stories of doing business in Brazil swapped.

These days it is becoming more than just a club for expats. Amongst the Kiwis, South African and Brits, more and more Brazilians are being tempted by the game. Brazil has never qualified for the Rugby World Cup, but some 5,000 Brazilians now play the sport.

Among them, the Paixao brothers, four young men from the Contagolo favela that overlooks Ipanema. Max, Marcos, Maxwiliam and Maicon have taken the game to their hearts. But it was not love at first sight.

"The first time I saw rugby I saw that it was a contact sport," Max says. "There was a lot of grabbing. I thought it was just for girls. But then I picked up the ball, started to run, started to play properly, learnt to pass the ball backwards. Then I realised it was something different."

These days you reach Cantagalo from Ipanema by means of a shiny new lift. The favela clings to the mountainside that towers above the beach. Before the lift was installed, a long climb meant that many of the favela's 28,000 residents felt less connected to the rest of the city. Like many of the city's favelas, crime and violence blighted Cantagalo for decades.

In recent years, the Rio authorities have begun a programme known as "pacificacion" - forced eviction of the drug lords and gang leaders, often using extreme violence.

As we walk into Cantagalo from the lift station, a group of six or so policemen look on suspiciously. Peace has been restored to the favela, but many of the residents worry that the strong-arm tactics are pushing out not just the criminals but also the soul of the area. The transition from gang rule to the rule of law is not always popular, but it is here that the organisers of Rio Rugby hope they can make a difference.

Justin Thornycroft, a Zimbabwean national, has been involved in running Rio Rugby for several years. His ambitions are big:

"The amazing thing about it is that the more one does, the more there seems to be to get done and our plans consistently grow into bigger and bigger goals.

"One of our dreams is to watch one of our players run on the field to represent Brazil in the 2016 Olympic Games here in Rio."

Walking through the graffiti-covered narrow alleyways of the favela, casually flicking a rugby ball to each other, the Paixao brothers could be in a commercial for urban cool. A few years ago, they were "shy, edgy, gawky little kids playing touch rugby" according to Thornycroft.

"Now they are confident yet unassuming young men, respectful off the pitch yet irreverent on it, lightning quick and with great ball skills and an eagerness to learn and improve."

Their infectious smiles and chilled bravado mask a difficult past however and Max believes that the sport has helped him make crucial life choices.

"A while back a couple of my cousins who were drug traffickers were killed," he says. "I used to have this thought in my head that I wanted revenge, at least I thought about it.

"But then I went to practise surfing and jujitsu, then I tried rugby and since then I've changed my mind completely. I think sport leads people to do good things and not bad things."

Second eldest brother Marcos, known as Careca, shows huge promise in the sport. He has already represented Brazil internationally and is the first person from his family to have left the country.

"What does it mean to me? It's changed my life," says Marcos.

"Who knows, one day I may be able to play in a professional team and then grow more beyond that. No-one wants to stay at the bottom, nobody feels good there. If we grow a bit more in sport then everything will be all right."

Growing the sport is the top priority here. As well as the late evening beach slots, the team practice on football fields at the university and throw the ball around on a run-down basketball court in the favela. The aim is for something permanent - a pitch but also a clubhouse and even a school.

"Rugby has a lot of fantastic lessons to teach kids in these poorer regions that sports like football just aren't equipped to teach.

"Like respect for your opponents, for the referee, for your team-mates and their skills and for yourself. Like courage in the face of larger or faster or more skilled opponents and courage when you're hurt or beaten.

"Like teamwork that is vital for a rugby team's success but is also vital when we look for work, in our relationships, in our families."

Nobody is pretending that throwing a rugby ball around on a beach will solve all the problems these boys' lives throw up. But the values the sport is teaching them is making a difference, and the organisers of Rio Rugby want that to be an example to others in the favelas.

The Paixao brothers' name means passion in Portuguese. It is clear that these boys from Ipanema have found just that in the oval ball.