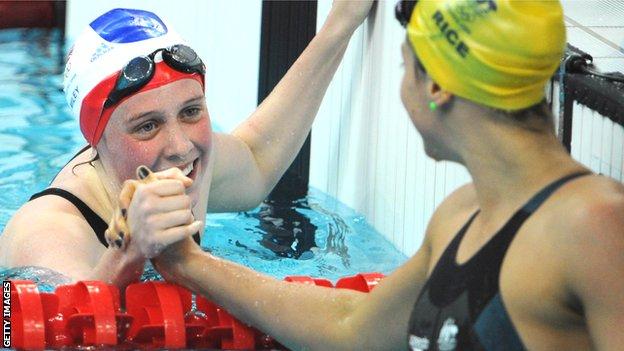 The British Olympic Association has clarified its position on athletes shaking hands with rivals and dignitaries at the London Olympics.

The BOA is concerned about illness affecting the hosts' hopes of success.

"The greatest threat to performance is illness and possibly injury. We are talking about minimising risk of illness. It is all about hand hygiene."

"This shouldn't be taken out of the context in which it was intended: the BOA wants its team to be the best prepared ever, and to consider every factor that might limit performance. Illness is one of those factors, better hand hygiene, as the Doc says, is an obvious way of reducing risk. Athletes won't be spending a huge amount of time in the village before their events. Afterwards, I suggest they'll feel liberated to hug as many people as possible. Especially if they're healthy and are wearing a medal."

But the BOA says it has not placed a ban on handshakes and is simply urging a common-sense approach to hygiene.

A spokesman said: "We are simply reminding athletes to take common-sense measures, such as washing their hands and using hand foam, to reduce the risk of catching a bug.

"It's the same type of advice many employers give to their employees.

"As an official policy, we are not advising our athletes to avoid shaking hands with people."

The BOA also tweeted: "Team GB, to be clear: do shake hands, do use hand foam, do wash your hands, do reduce the risk of catching a bug. It's all common sense."

Around 10,000 competitors will take part in the Games, with British athletes set to share rooms, while eating with competitors from more than 200 other nations.

McCurdie added: "Being at an Olympic Games means you are normally inside a bubble and so there is effectively quite a limited number of people that you interact with when you are away in another country.

"In London we do not believe that is going to be the case. The variety of people the athletes and support staff are going to interact with is going to be huge.

"At an Olympic Games or any major event the performance impact of becoming ill or even feeling a little bit ill can be significant.

"Essentially we are talking about minimising risk of illness and optimising resistance. Minimising exposure and getting bugs into the system and being more robust to manage those should that happen. Hand hygiene is it."

British rower Zac Purchase, a gold medallist at the Beijing Games in 2008, said on Twitter that the advice was of the sort athletes routinely received, but added: "[It's] a bit pointless unless you are going to run around with disinfectant for every surface you come into contact with."

The United States team, which will send the most athletes to the Games, is issuing no such warnings about handshakes.

"We always encourage our athletes at the Olympic Games to embrace the Olympic spirit and meet, greet and interact with as many different athletes from as many nationalities as possible," United States Olympic Committee spokesman Patrick Sandusky said.

Liz Wyse, an etiquette adviser from publisher Debrett's, said: "Obviously there are concerns about keeping in a tip-top physical condition but [the BOA advice] does seem a bit extreme.

"If somebody extends their hand in a friendly greeting and you don't give your hand back because of hygiene concerns that could look very rude.

"It is a bit of a sad thing if people are worried about shaking hands in case it spreads disease."