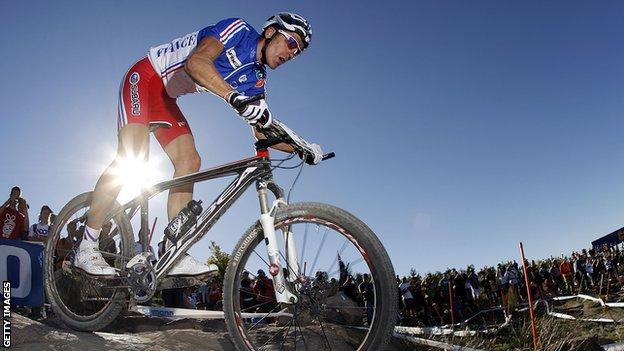 He suffered a puncture on the opening lap of the race and retired soon afterwards.

"The first lap was the worst thing that could happen to me, because I did hard work for four years to be 100 percent today," Julien said. "And to have a mechanical problem is the worst luck."

Fri 01 Jun 12: France has finished second in the Olympic qualification rankings and can send three riders to London 2012. Julien Absalon will almost certainly be selected to compete for France.

Sun 20 May 12:Julien Absalon has won the La Bresse leg of the 2012 UCI Cross-Country Mountain Bike World Cup despite crashing on the final lap.

"It is maybe one of my best races. It's been in mind forever - the first World Cup at home is a lot of pressure, and I'm happy," Julien said after victory on the course, which was designed by his brother Remi and is located 10 km from his home.

He crashed early on and abandoned the race after four laps.

He lies third in the overall rankings behind Jaroslav Kulhavy and Nino Schurter and after two races.

Sat 17 Mar 12: Julien Absalon has finished fourth in the opening race of the 2012 World Cup.

"I hit a tree with the outside of my handlebars on a fast stony section and thrown to the ground," Julien told Velovert.

"I'm not doing so bad, it could have been more serious. My [swollen] knee is going down quickly, it should allow me to resume training on the road soon but it will take a little longer for the thumb fracture to heal so I can go on the bike."

Julien crashed spectacularly after he hit a root and was unable to catch up. He finished 1 minute 26 seconds behind Jaroslav Kulhavy.

"As for the crash, these things happen," Julien said. "For me, there was no other tactic in the final part but full attack to stay within the top three. When Kulhavy is riding strong, you already have a hard time following him.

"When you have a crash it's even harder to chase him. I wanted to fight hard to get back in the chase group. I took lots of risks."

He finished fourth in the final round at Val di Sole, Italy - a week after coming third in Nove Mesto Na Morave, Czech Republic. The overall series was won by Jaroslav Kulhavy who secured victory in five of the campaign's seven rounds.

Sun 07 Aug 11: Julien has won silver at the 2011 European Championships. At the race in Dohnany, Slovakia, Julien finished 24 seconds behind the Czech Republic's Jaroslav Kulhavy.

Talking about the circuit, Julien said: "It's difficult technically and also physically. The only problem is it's really difficult to pass on the track because most of the time you are on a single track."

Not that the Frenchman needed to overtake in Sunday's event - he crossed the line in one hour, 31 minutes and 48 seconds, well ahead of his nearest rivals.

Sun 29 May 11: Julien has won the Offenberg World Cup in Germany for the fifth consecutive year. After three of the seven races that make up the World Cup series, Julien is now the overall leader.

"I knew I needed to attack at the beginning of a long climb, like I have done each year, and so I did the same," said Absalon.

"To win a World Cup you need to do a perfect race because the gaps are small. I planned the beginning of my season to peak for this race because I like it so much and it is only two hours from my home."

Sun 22 May 11: Another second place finish - this time in Yorkshire's Dalby Forest - consolidates Julien's grip on the second spot in the overall World Cup standings.

Sun 28 Nov 10:Julien finished fourth in one of the world's most extreme sporting challenges - Mega-avalanche.

The downhill event, down the side of a volcano on the French-administered island of Reunion, was won by his brother Remy.

Sat 28 Aug 10: Julien has finished second in the 2010 UCI Cross-Country Mountain Bike World Cup. He lost out to Nino Schurter after his bike suffered a flat tyre in the final meeting at Windham, USA.

Mon 9 Aug 10: Julien still leads the world rankings despite being beaten into second place in round eight of the UCI Mountain Bike World Cup.