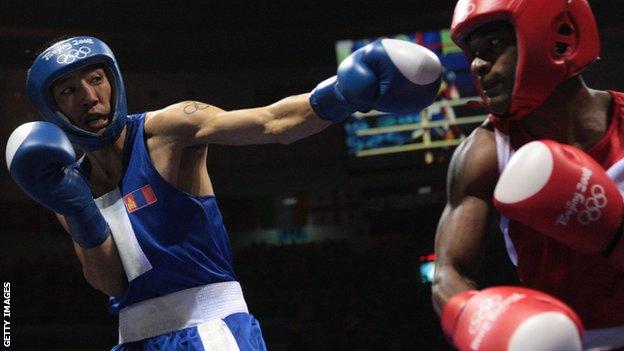 In a city centre gym, two girls pound nine bells out of each other, to roars of approval from the crowd.

Wrestling, not boxing, is the sport most people associate with Mongolia but the latter is becoming more and more popular, thanks in part to the achievements of one man.

He is sitting in the stands, watching the bout intently. His name is Enkhbatyn Badar-Uugan and at the London Olympics he will be defending the gold medal he won in Beijing.

At 26-years-old, he is a national hero but in this sparsely-populated country, he can wear his fame lightly. People do not bother him much.

So as young fans come up to ask for autographs he takes the time to chat to them with one eye watching the action going on behind them in the ring.

He trains in the same Ulan Bator sports palace gym used by the kids training after school. There is not much special treatment in evidence here.

He drives me to see where he came from - his old neighbourhood in what is still a rough suburb.

"I used to get into fights all the time," he tells me. "But then my father told me to channel that aggression into something more useful."

These days he owns a big apartment he shares with his wife and two young children. His gold medal is pinned on the wall, along with the plaques and trophies that tell his story.

The preparations for the next chapter are now beginning. As soon as he struck gold in Beijing he says, he started thinking about how to win the next one in London.

In fact he smiles a lot but says little. He tolerates the interest others have in his career but does not really encourage it.

I suspect he is happier to let his fists do the talking.