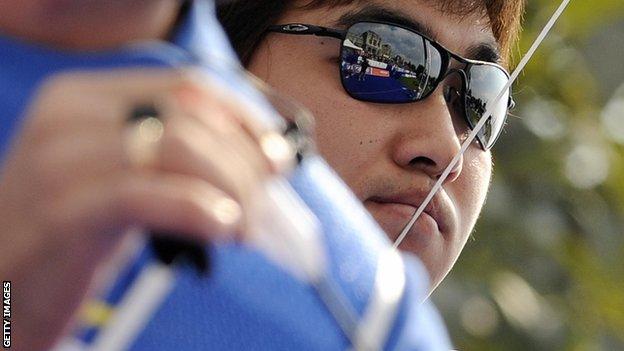 At 6am, South Korea's top athletes emerge onto the outdoor track - a thin trickle of brightly coloured track suits under a grey, early morning sky.

Beside the running lanes, a stereo system pounds high-energy Korean pop music into the damp air.

If the Olympics is sport's most glamorous occasion, the training to get there certainly isn't.

For South Korea's Olympic hopefuls, the day starts with aerobics - led by an enthusiastic instructor who seems to be moving twice as fast as anyone else.

Among the class is Im Dong-Hyun, one of Korea's top archers. Tall and stocky, he drags his body through the routine, half a beat behind the coach - just like everyone else.

But then, he has a better excuse than his team-mates for not keeping up with her moves: he probably can't see her very well.

Dong-Hyun is so short-sighted, he is known as Korea's 'Blind Archer'. His eyesight is so bad, he needs to be ten times closer in order to see objects clearly.

But it is not his eyesight - nor his lack of enthusiasm for aerobics - that is threatening his place in next year's Games.

It takes a lot of strength to use a bow and arrow accurately, and Dong-Hyun has some catching up to do before the 2012 selection process begins.

"The two most difficult things to deal with are bad teamwork and personal injury," he says.

"I've had some surgery and shoulder problems. I try not to push myself too hard, but I also need to perform and earn the results."

He spends some time each day in the gym, weightlifting to build his strength ahead of the crucial qualifying tournaments here in a few months' time.

The commitment is tough, he says: "I have to give up time, freedom. I'm confined to these quarters but this is what makes me who I am, this is why I'm here."

I put it to him that it must be hard on the other areas of his life.

"It is difficult to have a girlfriend or see friends" he says. Then, smiling, "but even within the rules, we find ways around it".

Inside the archery pavilion, his head-coach Jang Young-sul is watching keenly, to see who will make it onto the Olympic squad.

This is a man who measures past competitions not by how many medals his Korean team won, but by how many they gave away to athletes from other countries..

And even on this rainy weekend, everyone has turned up for practice.

Archery is everything for me - it's given me fame and money. It's everything I've got - it's like a father and mother to me

"It's a worldwide trend these days that athletes get weekends off" he tells me, "but the archery team have a very focused goal of winning gold in the Olympics, so even on Saturday morning we're all here training."

Even someone as good as Im Dong-Hyun, he says, has only a 50/50 chance of making it onto the squad:

"Past performance isn't a consideration. Even if they've got gold medals in previous Olympics, they won't make the selection this time unless they do well in the local tournaments."

Dong-Hyun has already won team gold medals in the Beijing and Athens Olympics but London might be his chance at an individual gold.

He slides the metal arrow into place - an action so practised you barely notice him doing it.

"Archery is everything for me" he says. "It's given me fame and money. It's everything I've got - it's like a father and mother to me."

At the end of the field, the target looks to him like a bucket of water swirled with coloured paints he says. I watch his arrows hit the centre, time after time.

Dong-Hyun was asked recently what he knew about London. Two things, he said: "It's always raining, and it's a country of gentlemen."

If all the years of training pay off, there is only one souvenir he will want to bring home - his first personal Olympic gold.