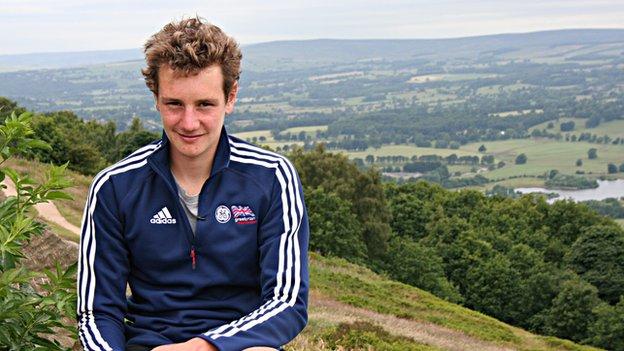 Alistair Brownlee is one of three Britons being tracked by the BBC's World Olympic Dreams project ahead of London 2012. This feature was originally published in 2010 on Tom Fordyce's blog, after the triathlete had won the first of his two world titles.

Maybe it is the implausibly youthful face, or the tattered square of dirty, reflective cloth taped to his mudguard or the white, towelling sport socks he has pulled over his cleats in place of overshoes.

Appearances have seldom been more deceptive. Brownlee did not snatch his triathlon world title in 2009 with a dip on the line, or sneak through as all others struggled. He owned it from start to finish.

Four wins in a row in the championship series, topped off with a showboating demolition of his rivals in the grand final in Australia - an unprecedented dominance from anyone, let alone a 21-year-old in his first full year on the senior circuit.

"I didn't have a clue it would happen," he says. "At the start of the year, I thought my form was pretty poor. I didn't feel that great at all. But by the time I won in Madrid, I felt unbeatable. That one almost felt easy."

This does not. We are barrelling along through the Yorkshire Dales, a third of the way into a three-hour training ride.

From a selfish point of view, it is probably a good job he is still recovering from the stress fracture that delayed the defence of his title; a gentle leg-spin for a world champ is a tongue-out thrash for a rusty amateur triathlete.

Brownlee, born in Dewsbury, schooled in Bradford, resident of Bramhope, is Yorkshire through and through. Not for him the sunshine and open-air pools of South Africa or Australia. Warm-weather training is when enough snow melts for the road to Thornthwaite to re-open again.

"I love it here," he says, surveying the windswept, dun-coloured fells and snowy moors on the horizon.

"It's got everything I need - great roads for cycling, perfect running, coaching and medical back-up in Leeds. Australia's too hot, and the roads round Stellenbosch are too busy. You can't top Yorkshire."

With us is Brownlee's 19-year-old brother Jonny, European junior champion, and a whippet-skinny cyclist mate of theirs called Josh.

There is plenty of competitive banter and no shortage of pace, albeit an endearing lack of the usual back-up.

I had left my tyre-levers, pump and spare tubes at home, assuming world champs would carry some sort of uber-sets provided by sponsors. But when Jonny gets a puncture, there are neither of the first two and only a late, lucky find in a back pocket of an inner tube.

No-one gets too worked up. You get the clear sense that the ideal afternoon for both Brownlees would be running and riding out here, regardless of professional training requirements.

"The thing I hated most about being injured was not being able to exercise," says the senior sibling. "Suddenly I had nothing to do all day. It was so boring.

"I couldn't get to sleep at night either. I'm so used to feeling tired from training, so I was just lying there unable to drop off. I went out a few times and got drunk, but that got boring pretty quickly. It's brilliant to be out here again."

The scenery is indeed splendid. So are the bikes. If there's one particular perk of being the world's best that your average amateur would most enjoy, it is having 10 top-of-the-range carbon beauties hanging from hooks in your garage.

Not everything is so high-tech. Brownlee's breakfast? "Three Weetabix. And then a load of Aldi crunchy oat cereal poured on top."

His favourite post-ride snack? "Fray Bentos pies. I love them." When you are burning 5,000 calories a day, you can afford to get stuck in.

Before we head out on the bikes, Brownlee has knocked off a 4,500m swim. After we get back, he will head to the pool at Leeds Met high-performance centre and bang out an aqua-jogging session. When the stress fracture is healed, that will be switched for reps round the track.

It is a routine based around open air and excitement. Some triathletes like to train on treadmills and turbo-trainers. It is measurable, controllable and precise. It can also be tedious in the extreme.

"I'd much rather be out on the mountain-bike or running on the fells," he says. "You work harder, and you don't even notice it."

It is also proven. Brownlee is a seven-time Yorkshire fell-running champion, was crowned world junior triathlon champion in 2006 and under-23 world champion two years later.

At the Beijing Olympics, he led midway through the run, only fading to 12th in the final stages. In July 2010 he won the European Championships in Athlone, Ireland, beating his main rival to the finishing line by a mammoth 40 seconds.

Brownlee is unlikely to let it go to his head. Jonny - and Josh - would take the mickey, for starters. He has also tasted life outside the sport, doing a term of a medicine degree at Girton College in Cambridge before the lectures and supervisions got in the way of training, and triathlon edged out Tripos.

Garage apart, his new house looks just as you would imagine an average 22-year-old's would.

There is a relaxed approach to tidying, outrage at the cost of fitting the bedrooms with curtains; "50 quid! For curtains!"

The clues to the identity of the owner are subtle ones - a Team GB wash-bag in the bathroom, an Ordnance Survey map of the Dales lying half-folded by the toilet.

While triathlon is still a growing sport back home, Alistair is an emerging star overseas. He kind of likes it that way.

"It was strange - when you're in Australia it's big over there, the crowds recognise you and you can't walk far without being stopped and asking how you're doing.

"But then I flew back to Leeds three days later, and I was walking round Headingley and no-one had the faintest idea who I was.

"That was really nice - three days of that was probably enough for me."

We have looped through Burnsall, along the Wharfe valley and back through Ilkley and Otley. It is a long way from the Gold Coast, and a long time since I ate breakfast. On the last hill back up to Bramhope, the amateur legs turn to lead and the professionals pull away.

"Fancy joining us for the aqua-jog?" asks Al. "You're all right," I say, as casually as I can while using the kitchen wall for support. "Train to catch." And buffet-car to raid. And carriage corridors to lie down in.

Sometimes it is easy to see what separates world champions from the rest.