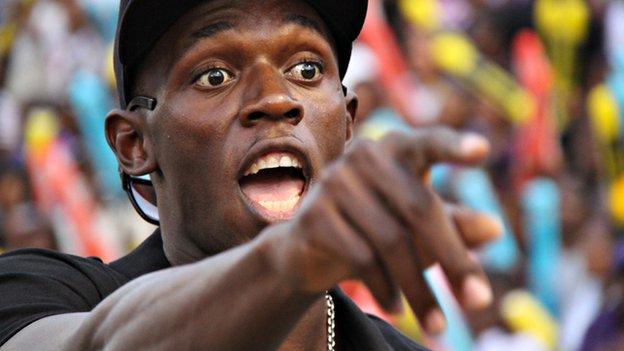 I've never felt an energy like this before; 30,000 people dancing, chanting, and screaming at the top of their voices.

With thousands of spectators dressed in their school colours, whistles tweeting and the smell of jerk chicken tickling the noses of all the punters, one would think this was Jamaica hosting the Olympics.

This is "Champs" - a school sports day like no other. And leading the Mexican waves that circle the stadium is the world's fastest man - Usain Bolt.

This is the crucible of Jamaican athletics and according to Usain: "Winning a Champs gold medal was like winning a World Championship gold medal".

Jamaica is a world powerhouse of sprinting. This nation of just three million inhabitants has won an amazing 13 Olympic gold medals for athletics. In the last five years both the Jamaican men and women have dominated the 100m event but what makes them so fast?

There are many theories that explain Jamaica's sprinting prowess.

Usain Bolt grew up in the hills of Trelawny so that's where I go to visit his father, Wellsley. He tells me his son got fit at a young age without knowing it.

"A lot of these athletes are from the hilly terrain, you know, my son he used to walk miles to school," says Wellsley Bolt. "So therefore I think that is what it is that causes these students to run so fast."

After Usain demolished the 100m world record in Beijing, his Aunt Lilly told Time magazine his success was due to the yam - a simple vegetable made up of complex carbohydrates.

Another explanation is that many Jamaicans possess something called the 'speed gene'. Professor Rachel Irving from the University of West Indies explains that a lot Jamaicans have high levels of serotonin in their bodies.

"It [serotonin] determines mental toughness. If your level is high, you have a special gene, you tend to be very determined, aggressive, determined," says Professor Irving.

"You're able to win under almost any condition, you close out everything else. That gives you the edge".

Professor Errol Morrison from Kingston University of Technology makes the point that because the Jamaican gene pool is relatively homogenous, "there are many potential Usain Bolts, Asafa Powells and Shelly-Ann Frasers so Jamaica will rule for many years to come".

Going back to Usain Bolt's old school, William Knibb High School, I meet his old PE teacher who tells me that every kid here wants to run.

"It's a passion. You ask Usain, he'll tell you that. It's just a passion," says Lorna Thorpe.

Talking about her influence on him, Usain says: "She's like a second mum. When I was in High School she looked out for me, she was always on me in school, making sure everything was ok, always focused. So she played a very big part for me".

This obsession with athletics and nurturing of talent at an early age must have something to do with Jamaica's success at the Olympics.

The most convincing argument for me is "Champs". The Inter-Secondary Schools Boys and Girls Championships is a massive school sports day held once a year in Jamaica's capital Kingston.

It's a showcase for Jamaica's best teenage athletes and many hope success can lead to a sports scholarship and an escape from a life of poverty.

Champs has the nation completely under its spell. Over 30,000 people turn up to watch these youths and today Usain Bolt is one of them because this is where it all started for him.

Amazingly, Usain failed to win any event when he first appeared at Champs in 2001 in the under 14 age group. However, in 2003, aged 16, he grabbed everybody's attention with record-breaking times in the 100m and 200m.

Eight years later, strolling around in front of the stands, Usain is trailed by his entourage and surrounded by photographers and camera crews jostling to get a shot of the man, the legend.

Every year Champs goes from strength to strength, so much so that many major athletic brands have taken heed and sponsor all the schools.

The day after Champs I sit down with Usain. He is a tall, graceful and intelligent individual. He carefully thinks through his answers and delivers them with the calmness of a well trained media personality.

So I ask him the big question, why do Jamaicans run so fast?

"It's confidence. We're a confident people, we love winning so we work hard." Usain tells me. "We want to be the best at whatever we do but anything we do or anything we put our minds to we always work so hard".

From our brief chat, Usain appears to be simply a lad from Trelawny living out his dreams and enjoying each day as it comes with a gift that will have audiences gasping for many years to come.

Unlike many, Usain has stayed on the island and refuses to be tempted to train in the United States. He loves Jamaica and Jamaica loves him back.

"A lot of kids say they're going be like me. Even 5-year-old kids see me and say 'I'm going to beat you one day'. That's a good thing for us," Usain says.

My first trip to the Island of Jamaica is one I will never forget. The natural vibrancy of the people slaps you in the face the moment you step off that plane.

I feel it is this swagger, this self confidence and assurance, mixed with a love for the sport of athletics that is responsible for producing so many great athletes in this country.

What scares me, though, is that one man's feat of running the 100m in 9.58 seconds has spurred on a new generation to dig deeper and run faster.

"There's going to be a lot of talent coming up," says Usain, who's not ready to give up his crown just yet.

"I've been telling all of them 'yeah, you're going to be good' but I keep trying to get in their minds saying 'you're not going to get me'."

The world better watch out because Jamaica is not ready to hang up her spikes anytime soon.