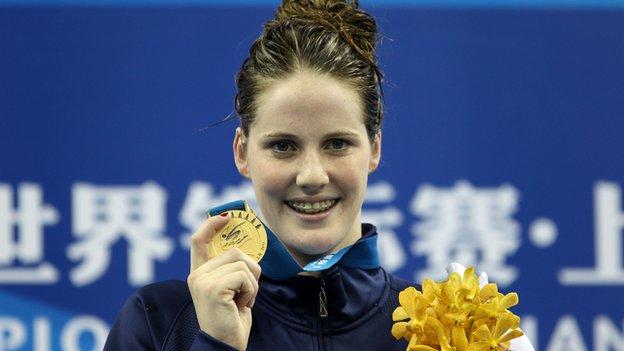 Melissa 'Missy' Franklin came to international prominence at last year's World Championships in Shanghai, winning three gold medals - in the 200m backstroke and two relays - at the age of just 16.

She won five medals in all, leaving team-mate Michael Phelps to declare: "She is probably one of the best female swimmers I've ever seen."

It's unbelievably refreshing to have her energy on the team

Last October, she became the first woman to break a swimming world record since hi-tech suits were banned at the start of 2010.

It came in the 200m (short-course) backstroke, her favourite event, at the World Cup in Berlin.

Born in California to Canadian parents, Missy the Missile is built to swim: she is already 6ft 1in tall with a 6ft 4in wingspan and UK size 11 feet.

Franklin's love of water extends beyond the swimming pool; the Colorado high school student is considering a degree in marine biology.