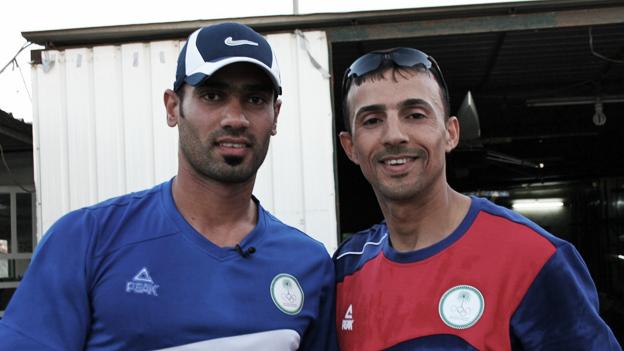 Needing to qualify for the final, he missed out on a place by one second.

"Before the race I was good, I was excited for the race," he said. "And then I started the race. I did well the first 1,000 metres, I was in second place until the last 200 metres.

"The last 100 metres I felt… not normal. It was crazy. I don't know, I just didn't feel any power in my body. I couldn't stand after the race."

Mon 05 Sep 11: Haider Rashid was unable to qualify for the London Olympics at the 2011 World Rowing Championships.

The Iraqi rower will have another chance to qualify for London 2012 at the Asian Olympic Rowing Qualifiers. This tournament is due to take place in South Korea in April 2012.

Wed 10 Aug 11: Hamza's wife has given birth to a girl named Zahra. Haider, meanwhile, is in his last year at the College of Sport in Baghdad.

Haider describes training during the second Gulf War as such: "We came training as long as we could but back then there were lots of bodies in the water.

"One was on one side of the pontoon and we were using the other side three metres away. It stayed there maybe two weeks. No-one wanted to move it."

He won bronze in the men's single sculls event, finishing some five seconds behind gold medalist Bajran Takhar of India.

"I'm so happy and excited because this is the first medal for Iraq at the Asian Games. This achievement will encourage young people in Iraq," Rashid said.

Thu 18 Nov 10: Hamza Hussein was part of the Iraqi men's four team that came fifth at the Asian Games in Guangzhou, China.

Sun 24 Oct 10: Haider Rashid and Hamza Hussein plus other athletes from Iraq's national rowing team competed in the prestigious Head of the Charles Regatta in Boston.

Rashid finished 15th in the Championships singles race and the Iraqi team came 10th in the lightweight fours.

They will now travel to Guangzhou, China to compete in the Asian Games.

Mon 18 Oct 10: A week before they compete in the 2010 Head Of The Charles Regatta, members of Iraq's rowing team have been giving US military veterans rowing lessons on the River Charles.

"We come here just for sports," Haider Rashid said. "It's just sports for us. We teach them some rowing and some sport, we had fun with them."

Thu 23 Sep 10: Iraq's rowing team have landed in Boston, USA to train with the US national team ahead of the Asian Games in November.

The team were brought to the US by a group of supporters including the largest non-profit rowing organization in the world, Community Rowing Inc. and the Head of the Charles Regatta.

"We are pleased to co-host the Iraqi athletes and wish them every success on race day," said Frederick V. Schoch, executive director of the Head of the Charles Regatta.

Fri 06 Aug 10: Haider Rashid and Hamza Hussein have revealed how Iraqi rowers trained amid the gunshots and bomb blasts of the second Gulf conflict.