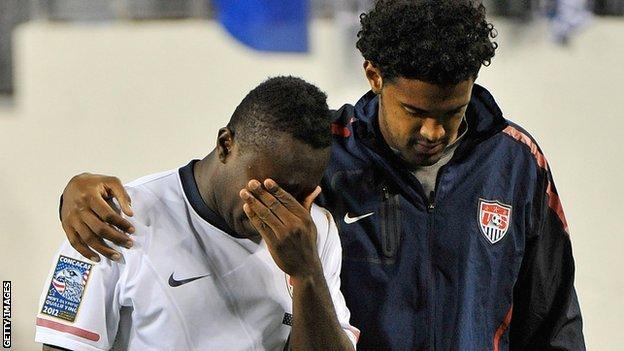 The United States missed out on London 2012 after a 95th-minute goalkeeping error by Sean Johnson resulted in a surprise 3-3 draw against El Salvador.

Jaime Alas's equaliser meant El Salvador instead have gone through to the semi-finals of qualifying Group A.

The Americans had come back from 2-1 down to lead, before the late disappointment in Nashville.

The draw with El Salvador leaves the United States adding 2012 to 2004 and 1976 as years in which they failed to qualify for the Olympics, missing out on a 15th appearance overall.

Having already lost to Canada, the United States needed to beat El Salvador to go into the last four. They attacked from the start and Terence Boyd scored with a volley after just 61 seconds.

But El Salvador turned the game around with two goals in three first-half minutes as Lester Blanco scored with a header and then Andres Flores steered in Alas's mis-hit shot.

The home team suffered a further blow when first-choice goalkeeper Bill Hamid went off injured and was replaced by Johnson.

Boyd finished well to level the scores again and Joe Corona, whose mother is a native of El Salvador, headed them back in front.

However, their hard work was all undone when Johnson allowed the ball to bounce over him from Alas's shot.

Porter added: "I'm proud of those guys and I know they're going to do great things in the future. I'm sorry for our fans, sorry for US soccer that we didn't get the job done. But there's nothing to be ashamed about."