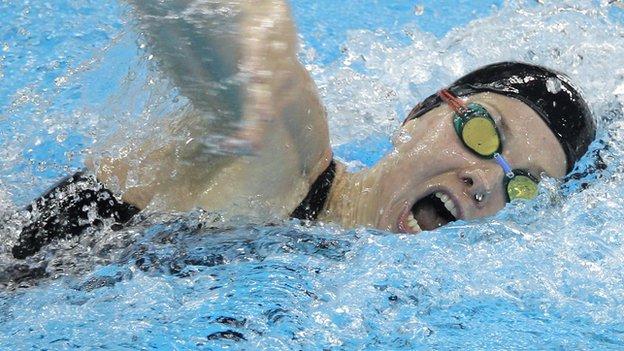 An impressive double gold in Beijing the 50m and 100m Freestyle. She reached the top step by swimming Olympic records in the finals of both, with 24.06 and 53.12 respectively.

A year after winning Olympic gold, Steffen again did the double at the 2009 World Championships, going even faster to break the world records for both 50m and 100m Freestyle.

At the 2011 Worlds in Shanghai she endured a torrid competition, failing to find her usual speed. Since then, she has bounced back with strong performances at the German European Championship qualifiers.

She takes her mental preparation as seriously as her physical fitness. After winning in Beijing she paid tribute to the role her long-standing psychologist Friederike Janofske played in her victory. "She has managed to bring out the best in me," she said.

She chose not to take part in the London 2012 test event as she felt that British wouldn't support foreign athletes and didn't want her first experience of the London pool to be negative.