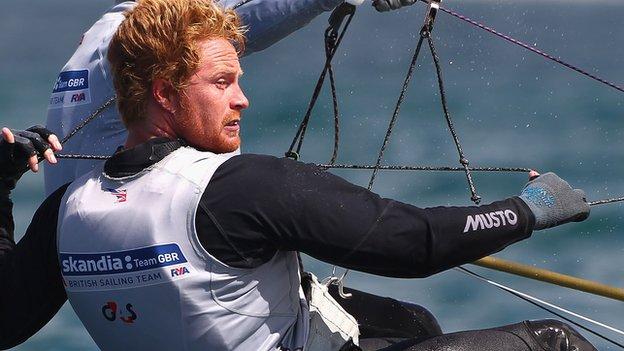 Winning the 2007 World Championship in partnership with Stevie Morrison and winning the Olympic test event in Qingdao a year before the Games. In the build-up to the Olympics in 2008 they had enhanced their gold medal prospects by picking up a silver at the worlds and arrived in Beijing full of confidence. However, they had a very disappointing time and could finish only ninth.

In the subsequent World Championships they came fourth in 2009 and seventh in 2010. They picked up a welcome bronze medal at the Sail for Gold event in Weymouth in June 2011 to book their place at the Olympic Test event.

Rhodes started sailing, aged five, at the Exe Sailing club in Exmouth along with Morrison. He was said to be far more interested in sailing than Steve, who preferred to watch football. They came sixth at their first world championship in 2003 and picked up their first Gold at the 2006 European Championships.

He has three superstitions: his boat has to have a name, he salutes magpies, and he does not wear a t-shirt during an event.