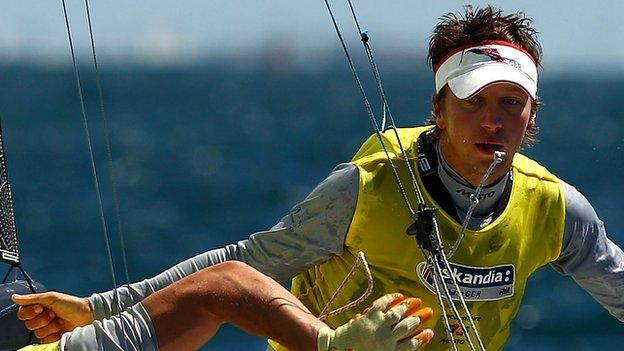 In partnership with Rick Peacock they notched Silver in three high profile 49er races in 2009: The 49er World Championships at Lake Garda; US Sailing's Rolex Miami OCR; and the Princess Sofia Trophy.

Born in Fareham, his first sailing experience was aboard an oppy at a summer camp that he was sent to by hism other. He progressed through the boat classes - from Mirror to Buzz then 29er - at Junior level.

Pink paired up with John Gimson to sail a 470 before moving into the 49er class. At youth level he won world, Europeans and national gold medals in 2001.

He started sailing with Peacock when they were chosen to be partners as Great Britain's Olympic representatives in 2008. They spent three weeks in Beijing preparing for the Olympics and gained invaluable experience. They won a gold at the 2010 Sailing World Cup Regatta in Kiel.

The pair are known, unsurprisingly, as Team Pink Peacock and have a pink peacock as their mascot.