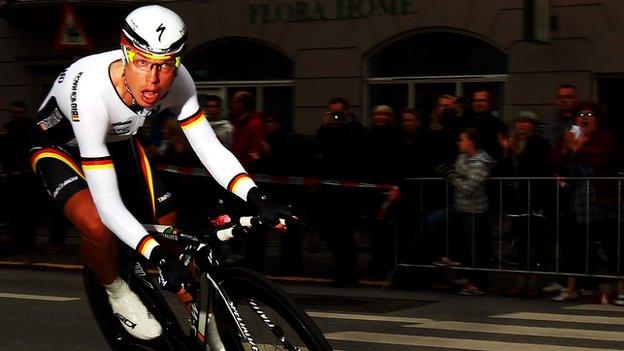 Winning the rainbow jersey of World Time Trial Champion at Copenhagen 2011, confirmed that Martin could deliver on his promise as he hurtled to glory well ahead of GB's Bradley Wiggins and defending Olympic champion Fabian Cancellara, his main rivals for London 2012.

While time-trials are Martin's strength, he has shown the potential to develop into a Grand Tour rider, notably in winning the week-long Paris-Nice race ahead of Wiggins in 2011.

Some commentators have suggested that he could become a contender in Grand Tours as he matures, but to dateMartin has focused on his strengths in time trials and shorter stage races.

His opportunities for personal victory have been limited by his role working for Mark Cavendish on Team HTC-High Road. This season he may find more freedom on the Omega Pharma-Lotto squad although it is clear the Olympics will be one of his big targets.

Martin was nicknamed "Der Panzerwagen", german for "Tank Car" by his High Road team manager Rolf Aldag on account of his combination of power and speed.