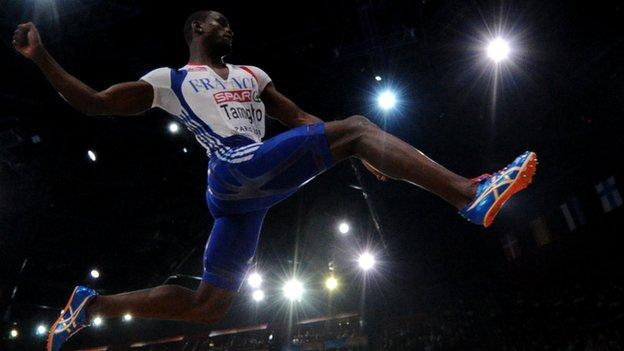 He broke his own indoor triple jump world record in March 2011, leaping 17.92m at the European Indoor Championships. The 21-year-old first broke the record to win the world indoor title last year in Doha with a jump of 17.90m.

He came to prominence when he won the world junior title in 2008, but he failed to qualify for the Olympics in Beijing, was only 10th at the last outdoor World Championships and took bronze at the 2010 European Championships when hampered by injury.

The self-confessed showman European Indoor title in front of an ecstatic Parisian home crowd, proved his decision to uproot from his home town to train with long jump legend Ivan Pedroso in Spain was the right one. Tamgho is yet to win a major title outdoors, which would make gold at his debut Olympics an even greater achievement.

Tamgho was suspended for six months in December 2011 after a training camp incident involving a female athlete. The ban handed down was 12 months with six months suspended, allowing him to return to competition in time for the Olympics.