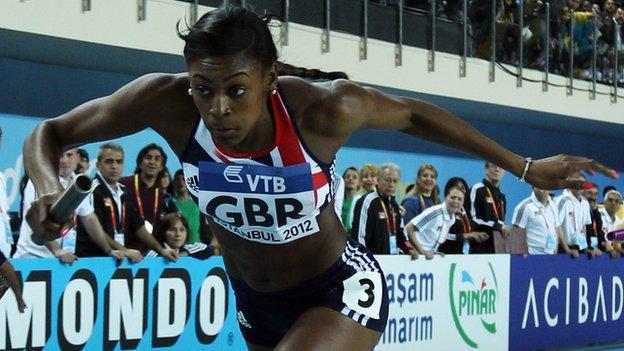 Shakes-Drayton ran the anchor leg for the GB 4x400m relay team, bringing them a surprise gold at the 2012 World Indoor Championships, as she ran down Sanya Richards of the USA and dipped ahead of her on the line.

At the age of eleven, she reportedly finished an impressive 52nd in the Tower Hamlets half marathon. Her schoolteacher promptly encouraged Shakes-Drayton to go to her local Mile End athletics club, where she still trains.

Her conversion from long-distance runner to the hurdles came by chance at around the age of 16 when she asked to join in a hurdling session that her coach, Chris Zah, was giving to his daughter.

She won European Championship bronze in the 400m hurdles and 4x400m relay in 2010, despite only being a part-time athlete.

In 2011 she became the first Briton - male or female - to win both the 400m and 400m hurdles at the UK Championships. In that season she produced some strong results in prestigious events, including a second at a Diamond League meet in Oslo

The east Londoner, who can see the Olympic stadium from her house, has only just turned full-time, having graduated from Brunel University with a degree in Sports Science in 2011.