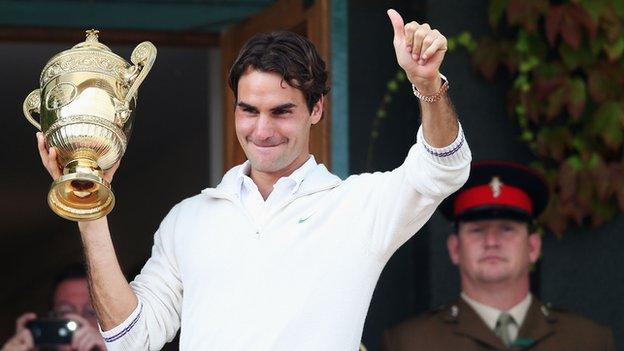 His entire career is one long highlight, with a record of 17 Grand Slam titles - the latest was a record-equalling seventh Wimbledon title at the All England Club in July. He is one of only seven men to have a complete set of Grand Slam titles. The only honour missing from his illustrious CV is an Olympic singles gold medal. However, he is the reigning doubles champion, having triumphed in Beijing with Stanislas Wawrinka.

Many people believe Federer is the greatest tennis player in the history of men's tennis. He has spent more weeks as world number one than any other man, surpassing Pete Sampras' record of 286 weeks in July 2012.

Federer's RF monogram started life as a logo designed by his wife Mirka for his fragrance, launched in 2003. He met Mirka at the 2000 Olympics.