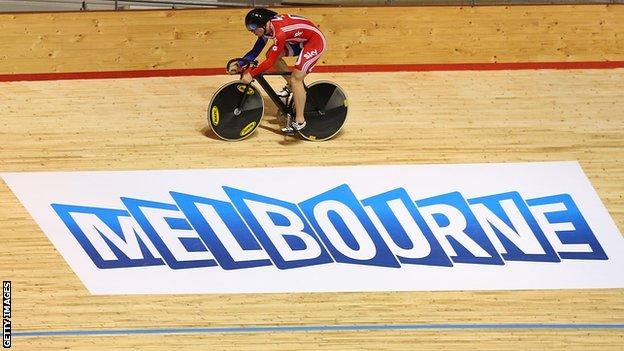 SAILING - ISAF World Cup, Palma, Spain (31 March - 7 April); Britain's triple-Olympic champion Ben Ainslie returns in this third regatta of the 2011-2012 World Cup, having recovered from back surgery. It is Ainslie's first appearance since his disqualification at the world championships for 'gross misconduct'. Another British Olympic champion, Paul Goodison, is set for a fascinating duel with Australia's Tom Slingsby in the laser class. Follow Ben Ainslie and Paul Goodison on Twitter.

GYMNASTICS - World Cup Series, Zibo, China (7-8 April); Louis Smith has got the all-clear to compete in China despite suffering a slight fracture in the ring finger of his right hand during training last week. The high-class field includes pommel horse world champion Krisztian Berki of Hungary, one of Smith's rivals for Olympic gold this summer. Follow Louis Smith on Twitter.

ROWING - GB World Cup squad announced (4 April); after last month's trails, Britain's crews for the first World Cup meeting of 2012 are revealed on Wednesday. It will provide a strong indication of what the Olympic squad, announced on 6 June, will be. Follow GB Rowing Team on Twitter.

HANDBALL - London Handball Cup, Crystal Palace (5-7 April); the men's teams of Great Britain, Tunisia, Argentina and South Korea are taking part in what GB coach Dragan Djukic is calling "the best handball tournament ever on British soil". All four teams have qualified for London 2012 and GB begin against the American champions Argentina on Thursday evening at 1900 BST. Follow British Handball on Twitter for updates.

Britain's Peter Wilson set a world record score to win the double trap at the opening Shotgun World Cup event of the year in Arizona.

Having made it to the final with the highest qualification score (148 out of 150), Wilson then hit all 50 targets for an overall score of 198 out of 200, eclipsing the previous world record of 196 set by China's Olympian Hu Binyuan in 2009.

Wilson - who is coached by a member of Dubai's ruling family - has returned to the top of the world rankings after his victory.

Dempsey was in contention to win gold but strong winds saw the final two days' sailing cancelled, denying him the chance to improve on second place.

Alison Williamson was top scorer in the first of three Great Britain selection shoots to stay on course for her sixth Olympics.

The Athens bronze medallist topped the seven-strong women's competition as GB's hopefuls were whittled down from 17 to 12.

The top three men and the top three women at the three-day final shoot from 19-21 April will compete at Lord's at this summer's Olympics.

Rajiv Ouseph secured his third title of the season when he overcame Henri Hurskainen to be crowned Finnish Open men's singles champion.

British number ones Chris Adcock and Imogen Bankier made it a title double by taking the mixed doubles.

They came back from the loss of the first game to beat Denmark pair Anders Skaarup Rasmussen and Sara Thygesen.

GB Boxing performance director Rob McCracken has named his squad for the final Olympic qualifier, which takes place in Turkey from 14 to 22 April.

One of the Olympics' most famous underdogs, Eric 'the Eel' Moussambani, is set to make an appearance at London 2012 after being named coach of the Equatorial Guinea swim team.

Moussambani became a cult hero at the Sydney Games in 2000 when he slowly made his way through a 100 metres freestyle heat, appearing to almost sink as he neared the finish.

It later emerged that he had only been swimming for eight months and had never swum in a 50m pool.

It is not known how many swimmers Equatorial Guinea will be sending to London.