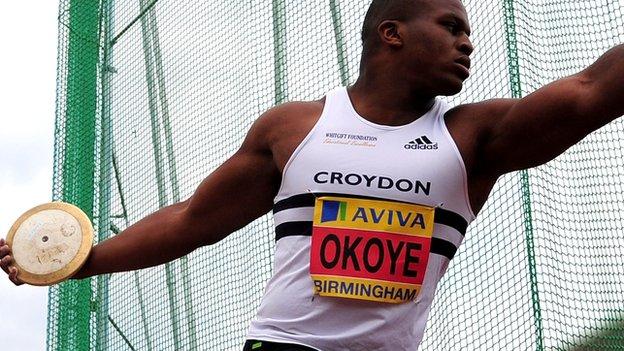 Okoye produced the longest discus throw by a teenager in history in July 2011 to break the British record.

He then won gold at the European Under-23 Championships and extended his national record this year to 68.24m.

He was despondent after struggling in the rain on his senior major championship debut this year. Okoye finished last in the final at the European Championships with a modest best throw of 60.09m.

Okoye, whose dad played American Football while at college in the USA, was on the books of Premiership rugby side London Irish as recently as 2010.

He had occasionally dabbled in throws at his school but 6ft 6in Okoye was given the number of coach John Hillier by a discus thrower friend and improved his personal best by more than 13 metres in 2010.

He has deferred his place at St Peter's College, Oxford, to study law