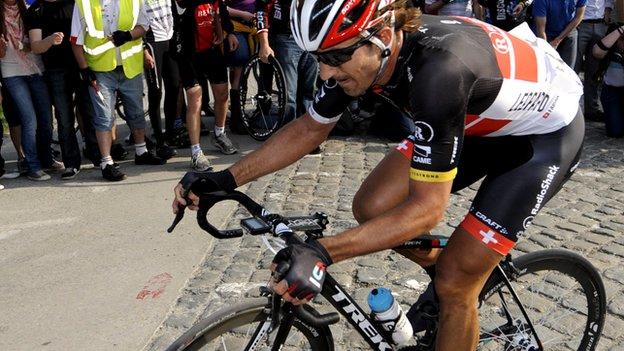 The double in two of the toughest races in the calendar in 2010, the cobbled Classics of Tour of Flanders and Paris-Roubaix, rates as highly as any of Cancellara's wins. The two races fall a week apart and in both Cancellara simply rode away from the competition in a defining display of power.

The dominant Time Trial specialist of his generation, he has won the World Championship four times, a run only interrupted in 2008 when he won the Olympic title.

It has also led to him claiming the Yellow Jersey of race leader during the opening week of the Tour de France after winning the prologue time trial.

Cancellara's dominance of the cobbled Classics in 2010 led to bizarre and unproven claims that he an electric motor hidden in the frame of his bike which he had used to distance his rivals.

His preparation for the Olympics took a setback when he suffered a multiple fracture of his collarbone at the 2012 editions of the Tour of Flanders.

A regular user of the social media platform Twitter, Cancellara's unique form of the English language has been dubbed "Fabianese" by his fans and followers.