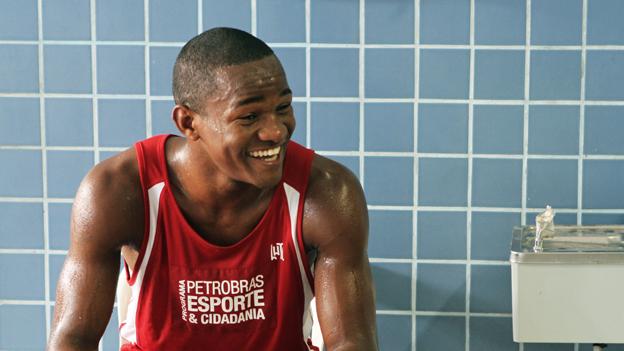 Brazil is preparing to stage the Olympic Games in the summer of 2016. One of the hopes is that sport will offer people an alternative to the temptations of a life of crime.

For World Olympic Dreams, Series Producer Kevin Bishop has been to the Complexo da Mare favela in Rio to meet a young boxer whose life story is a mix of tragedy and triumph.

If you drive out of the centre of Rio de Janeiro, away from the miles of golden sandy beaches and the partying crowds of Ipanema and Copacabana, you will come across a very different face to the city.

Complexo do Mare is a huge favela, or shanty town, home to some 130,000 people and one of the toughest places in Brazil to grow up.

But 23-year-old boxer Roberto Custodio is a tough guy and despite many years of tragedy and struggle, he is on the brink of qualifying for London 2012. Roberto paints a grim picture of life growing up in his favela.

"There's a lot of violence here," he says. "You wake up in the morning and don't know if you'll make it back home that evening.

"You thank God every day if you stay alive because you can be at home, it all sounds quiet and you go out and bang - you're in the middle of a gunfight.

"The police come in and you're in the wrong place at the wrong time. I've had friends that died like that. If you live in the favela you're just a statistic."

The turning point in Roberto's life came when tragedy hit his family. His father was killed by favela drug lords ten years ago. The memories still haunt him.

"He wasn't an addict," he tells me. "He was just a working man, a bus driver.

"The criminals interfered in a fight between husband and wife…lots of things went through my head. It was adrenaline. I never thought I'd lose my father that way.

"If people do the wrong things, you sort of expect it. They'll either get arrested or killed but the way he led his life, I don't even like to talk about it."

Roberto suddenly breaks down in tears, choking out his words. "It's so difficult. I really miss him, not being able to share my success with him."

Seeing his father killed spurred Roberto on to devote his life to boxing - as a way of channelling his anger and adrenaline. He is now on track to qualify for London - or if that does not work out, then in four years time when the Games come to Rio.

Rio's favelas have long been blighted by violence - drug and gun crime here have, at times, made these sprawling suburbs virtual war zones.

And violence has been met by force. A programme known as 'pacification' is gradually pushing out, or in some cases killing off, the drug barons. Troops have taken over many of the favelas and are slowly restoring order. The authorities hope it is a policy that will show real results before the Olympics arrives.

The mayor, Eduardo Paes, believes the Olympics are about a lot more than just a sporting event and a party.

"There's the gathering of the 15 days, three weeks, everyone together, a big party and Rio is very used to that," he says.

One British man is hoping that sport can change lives here.

Luke Dowdney runs Fight for Peace - a gym and education centre for young men and women from the favela. Its headquarters is a modern, two-storey building on the edge of the favela, close to the airport road.

Roberto is their star graduate. We meet one morning in the gym's main space. A boxing ring dominates the room. Punchbags and slowly-circling fans hang from the ceiling.

Girls and boys, some as young as eight or nine, shadow box in front of mirrors that spread along the back wall. It is a calming place where young favela residents can take out their aggression under supervision and in safety.

Luke Dowdney hopes he can inspire more to follow in Roberto's footsteps. He believes that the violence that has plagued Rio's favelas can be stamped out and that the majority of residents here want to help make that happen.

"There's so many strengths and so much in the community, in the favela we should be proud of," he states.

"And rather than put walls up and say that we have to keep that over there, it's not part of our city… now because of the community policing programme favelas are more accessible to people today. They're learning that they're not these terrible enclaves of violent people.

"There's only a couple of per cent of the people that's been involved in that stuff. 99% of the people who live here are hard working individuals who are just trying to get by."

As well as boxing lessons, young men and women get classes in regular school subjects as well as life skills and citizenship. Dowdney sees boxing as the ideal way to teach kids here how to cope with life's challenges.

"We're just here to do what we do, which is to run a successful boxing club and give the kids a chance to access education and job training courses. Give them a hand," he says.

"They have to do all the hard work. We don't do that. All we do is provide a structure for them. And that's the whole premise of Fight for Peace.

Relaxing at home with his wife and daughter, life for Roberto these days is good.

A young family and a chance of competing at the Olympics have kept him on the straight and narrow. He breaks out into a huge smile as we ask him how his family has inspired him.

"My wife and daughter give me strength - my whole family do," he says.

"When I'm up there I think of everyone from the favela. Sometimes it's hard to get to a certain level if you're from a place like this. But I think - I did this myself. No-one did this for me. It makes me so proud."

Proof that - with a little help - you can fight your way out of anything.